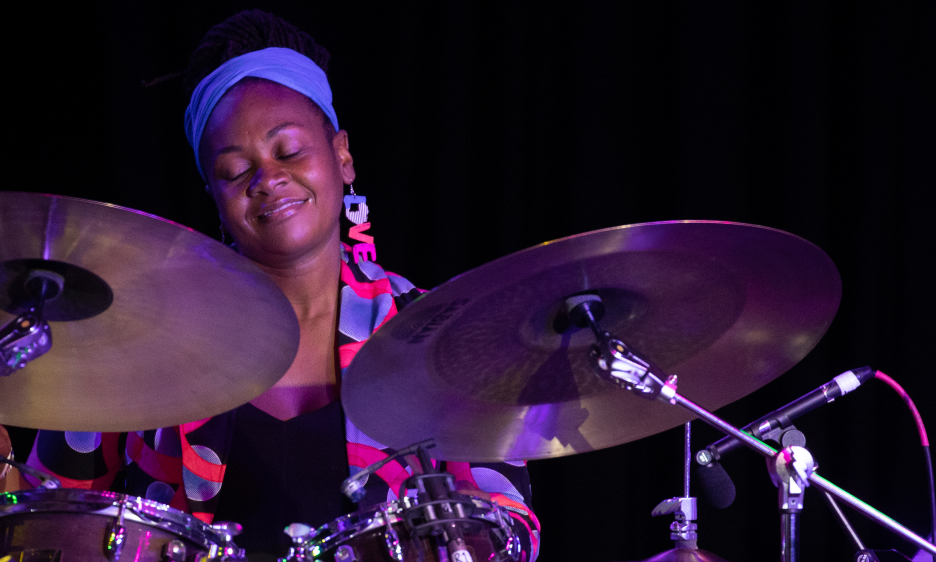 This is the fourth of four pieces covering the 2021 Detroit International Jazz Festival. Two weeks before the festival, a decision was made to go to a virtual format due to the surge provided by the Delta variant of Covid-19. Three outdoor stages became three soundstages in the ballrooms of the Renaissance Marriott hotel. All sets were run back to back, with no overlap. This made roaming the grounds and catching at least a piece of everything, impossible. While the broadcast of Facebook and YouTube formats offered every note of the festival, we as media members were allowed into the soundstages to witness the music live. The broadcast crew and writers were the only members permitted in the broadcast area. In order to find time to write, have a bite to eat, or take care of any professional and personal matters, you literally had to pick and choose which sets to miss from the continual flow of performances from noon to midnite. Writing a set by set description encapsulating each performance became impossible. While in the soundstage, you could not tap into the broadcast for context, set lists and other helpful items. We were virtually in the dark, pun intended. The real stories began to emerge—the quick change to virtual, the amazing quality of the broadcast, the vibe of the music minus a live audience and exceptional deeds in terms of mentorship and impacting the future of jazz. Our times, the worldwide pandemic, was indeed a huge part of the story. And so you will find highlights of many sets, plus storylines that helped make the 2021, 42nd annual Detroit International Jazz Festival a unique success. Thanks to festival photographer Jeff Dunn, wonderful images of the four days are included.

While four days may seem like a long stretch to attend set after set at a jazz festival, the vibe Monday morning in the Renaissance Marriott was still one of anticipation for the music that was to come that day, but as well mildly sad, as bidding farewell always is. There were people not to be seen for a while. The deft silence that will somehow become apparent with the last note Monday night would be as a bugle call signaling a return to our everyday lives. Festival participants inquired as to when you would be flying out, where you would be going next. In the cloud of a worldwide pandemic, there were friends and acquaintances that each person had not spent time with for over a year, and now with the uncertainty that lies ahead, may not be in the presence of for some time to come.

Detroit, and more specifically, the music department at Wayne State University, took center stage to kick things off, with an all-star band of WSU and Detroit collegiate musicians led by trumpeter Keyon Harrold. Assembled by Professor and Detroit Jazz Festival Artistic Director Chris Collins, the band is a powerful assemblage featuring top collegiate players from the region tilting heavily towards WSU. "I am so proud of the annual Wayne State presence at the Detroit Jazz Festival! Students, faculty and alumni can be heard throughout the 2021 four-day world-class event. It is a powerful display of the unique connectivity between WSU and Detroit's premiere jazz event," observes Collins. Harrold is a musical gatherer, having performed with Beyoncé, Jay-Z, Snoop Dogg, Rihanna, Eminem, Maxwell and Anthony Hamilton while evolving into one of the most important generational voices on his instrument in the jazz idiom. Harrold stepped in at times to solo, offering a strong connection with the blues on every note, whether playing tenderly, or breaking off a phrase with a growling snarl.

With alto saxophone poll topper Rudresh Mahanthappa, and drummer Terri Lyne Carrington as co-music directors, Celebrating Bird @ 100 intended to explore the innovation and influence of the music of Charlie Parker not in a repertory sense, but by applying Bird's innovations to the jazz music of today. The quintet performance with bassist Matt Penman, pianist Kris Davis and trumpeter Arturo O’Farrill set out on that course, with Mahanthrappa's relentless, quicksilver playing acting as a diametrically opposed counterbalance to Davis' sparse, pensive approach on piano and Nord keyboard. With classic melodies virtually indistinguishable, and minimal verbal communication from the players, the performance would not suggest to most, a connection with Bird. It would seem as a gig with five original voices with daringly disparate styles, playing post modern jazz. The connection to Parker is analogous, as it could be argued for all jazz post bebop. Carrington was riveting, effortlessly approaching time with a sense of elasticity, always marvelous to witness.

Perhaps the emotional climax of the 2021 Detroit Jazz Festival occurred at 6:25 PM on this, the last day. Artist-in-Residence Dee Dee Bridgewater performed with an all female Big Band, filled with musicians she had personally mentored, and mentors who continue to work towards gender justice in jazz. Bridgewater, throughout the four days of the festival, left her mark as a mentor to these young women. Referring to her as "Mama Dee Dee," there was a strong bond not only of respect, but of love that was plainly evident both on and off the stage. Bridgewater is the right energy, at the right time to engage this, the most important challenge in jazz. The representation of strong, female musicians in 2021, was the emotional and creative center of the festival. While Bridgewater has already created a legacy as one of the great singers in modern jazz, her work with the Woodshed Network may just be her greatest contribution. It may already be her most influential.

While Bridgewater did perform elegantly she gave way to singers Darynn Dean and Kennedy at first, with Kennedy delivering with "Drunk In Love." Her powerful approach spoke to her roots in gospel and the blues. Bridgewater's performance of a Nina Simone medley dispelled any doubts about her current prowess at seventy one years of age. Her strength and elegance is upheld by her articulation of the lyrics. Nobody gets the message across quite like her. Dusting off a pearl in "Feeling Good," her place in the lineage of jazz vocalists became clear. Carrying the baton passed to her from Ella, Nina and Carmen, the sight of Dean and Kennedy adoringly listening and moving to the music was in itself the act of passing that baton one more time and again.

Perhaps most impressive was the performance of "Persistence," a composition from New Orleans based bassist, Amina Scott. While Scott was impressive throughout the festival with her contributions on both double and electric bass, her composition and arrangement of this piece spoke to her artistry in a more complete sense.

Veteran saxophonist Jimmy Greene was featured in the late night set on the Absopure stage, featuring guitarist Mike Moreno, drummer Kendrick Scott, pianist Aaron Goldberg and bassist Reuben Rogers. Greene last appeared at the festival in 2019, with a memorable performance with Ron Carter's Foursight ensemble. The band performed selections from their new release, While Looking Up (Mack Avenue, 2021). Greene plays to his strength as a composer with a playing style that samples from the same frame of mind as an improviser. On the title piece from the album, Moreno's post modern guitar style was artfully in contrast with Greene's fluid, melody based musings. Goldberg's solo skipped along like a flat stone on calm water, free to be on the fly by Roger's dynamic bottom end, and Scott's polyrhythms. As this set was the last of the festival for most media members, having Scott behind the kit was like a shift into overdrive at the end of a long journey. Greene spoke to the fact that the band hadn't played live in quite some time—a theme heard repeatedly in the music business in current times. His demeanor was one of humility. His melodic passages throughout the set had spiritual overtones, touching many emotional high points on both tenor and soprano saxophones. It seemed a perfect finale, and an invitation to well earned hang time after the set on the Marriott's third floor patio veranda.

At the end of four days of constant world-class jazz, the music still sings within you for many more days to come. The production was a wonder in itself, with the transition to an all virtual festival, and the quality of product that resulted. The ideal of true professionalism was upheld from the volunteer staff to the union production workers and the musicians who came to town to do what they have always done in Detroit—play for the people, for free. Corporate sponsors held up their end of the bargain as well. In the midst of tragedy, the festival miraculously maintained a welcoming vibe, all stemming from a love for the music itself, and the understanding of its vital importance culturally.

Artist-in-Residence Bridgewater virtually defined what the role entails and then some. Her gathering of strong female voices, her invaluable mentorship, and the loving response of the musicians will forever be the predominant visual of the 2021 Detroit Jazz Festival. Her achievement speaks to true justice, to true democracy in an art form that is the ultimate democracy. Her dedication to artistry is, and has always been exemplary and relentless. Bravo Mama Dee Dee.