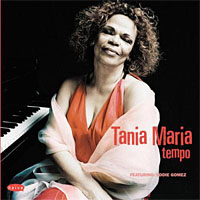 Brazilian pianist/singer Tania Maria is the product of warm and humid climes. Born in Sao Luis in the northwestern part of the country, she emerged into the musical intersection where the bossa of Brazil rubs up against the salsa of the Caribbean. All influences are in evidence on Maria's opening performance of the Martino/Brighetti standard, "Estate." Musically active since the 1970s, Maria's career can be easily sampled with any simple YouTube search. What the intrepid researcher will discover is a force of nature, untethered by any conventional musical wisdom. Maria is that talent whistling past lesser talents.

On Tempo, Maria is joined in duo with bassist Eddie Gomez, with whom she has collaborated in the past. Gomez's role is one expanded beyond mere timekeeper. He is melodically melded with Maria, in both voice and piano. Gomez's empathy with Maria is something greater than that shared between pianist Bill Evans and bassist Scott LaFaro, peppering Maria's art with piquant runs and glissandi. On Antonio Carlos Jobim's "A Chuva Caiu," Gomez's grace and sophistication perfectly complements Maria's cosmopolitanism and broad musical world view.

In Maria's hands, the music is not jazz first, Brazil second; it is very much the opposite. Jazz is the vehicle when she chooses it. Or the blues. Her original, "Yeah Man," is nominally a minor-key instrumental blues that is the least Brazilian recording on the disc, but Maria still manages to season it with the warmth of home. Another original instrumental, "Senso Unico," finds Maria and Gomez squarely in their Latin element, waxing balladic and pensive. Maria's playing is a mirror of her singing, dry sunshine and coconut oil, the smell of the Southern Gulf.

"Dear Dee Vee," another original instrumental, is very much in the samba mode. Maria plays with a effortless momentum betraying her long a successful career. Much like Madonna on the world pop stage, Maria is uncompromising, creatively mercurial, and steadfastly faithful to her vision. This is rare musicianship.