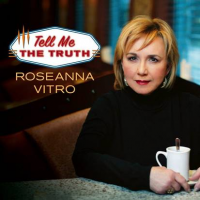 It is completely fitting that vocalist Roseanna Vitro conceive of and release a recording devoted to the music of the American South. But, this is not just any thoughtlessly-assembled concept recording. Vitro is the master of intelligently programmed and produced thematic albums as evidenced by: Catching Some Rays: The Music of Ray Charles (Telarc, 1997); The Time of My Life: Roseanna Vitro Sings the Songs of Steve Allen (Seabreeze, 1999); Conviction: Thoughts of Bill Evans (A Records, 2001); The Delirium Blues Project: Serve or Suffer (Half Note Records, 2008); The Music of Randy Newman (Motema, 2011); and Clarity: Music of Clare Fischer (Random Act, 2014). At best, these are not subjects one would expect addressed on a jazz recording. That said, Vitro, and husband/producer Paul Wickliffe, have made a creative habit of envisioning and producing such unlikely, and well-executed projects.

A native of Hot Springs, Arkansas, Vitro is part of a rich local musical tradition that included Johnny Cash, Bob Dorough, Glenn Campbell, Al Green, Levon Helm, among others. Her Southern bona fides are beyond question. But "Southern Music" describes a diffuse expanse of material. This is where Vitro is at her programming best. In all her similar projects, she resists the obvious. She proves this by kicking off Tell Me the Truth with Allen Toussaint's "On Your Way Down," a darkly-colored classic covered by Little Feat, Gov't Mule, and Phish, among many others. In Vitro's hands, this menacing, New Orleans Gris Gris is transformed into an upbeat, Latin-inflected tome on humility when especially gifted. Pianist Mark Soskin provides a sharp arrangement that features guitarist Mitch Stein in an assertive and distorted guitar solo and saxophonist Tim Ries waxing R&B on tenor.

While Patsy Cline's "Walkin' After Midnight" has been covered by other jazz vocalists (Patrice Jegou, Livia Devereux, Lawrence Lebo, Tierney Sutton; Kari Gaffney), Vitro injects a breezy, strolling quality to the song. She sings with a soulful abandon steeped in the jazz tradition. Vitro shares duet singing duties with Al Chestnut on the Staple Singers' "Respect Yourself" and trio duties with Kate McGarry and Cindy Scott (with one Sara Caswell on violin) on Eli Yamin's "A Healing Song, all with festive results. Creedence Clearwater Revival's "Fortunate Son" in transmuted into a 21st Century jazz anthem. Vitro finds much common ground with Mose Allison on the latter's "Your Mind is on Vacation," at the same time turning the soul meter on Boz Scagg's "I'll Be Long Gone." Roseanna Vitro should be rightly heard as one of our leading jazz vocalists today. Her track record of smartly programmed recordings is ample evidence of this. Tell Me the Truth is a valuable addition to her continuing contribution to jazz vocals.

On Your Way Down; Walkin’ After Midnight; Respect Yourself; Your Mind is on Vacation; I’ll Be Long Gone; Foolin’ Myself’ Tell Me The Truth; When Will I Be Loved; Fortunate Son; A Healing Song; I’ll Fly Away.