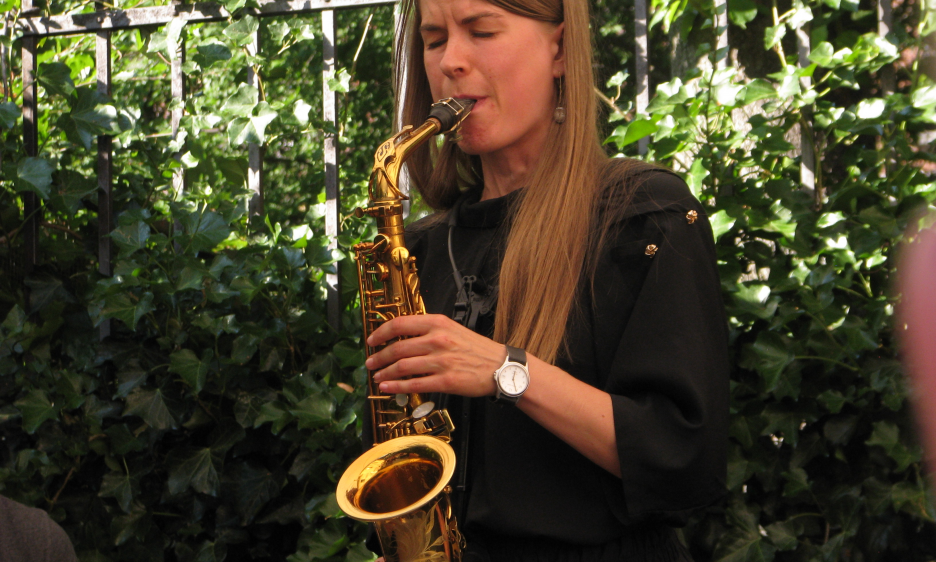 It was a flying visit of two days at this year's Copenhagen Jazz Festival with its 1500 concerts during 10 days. But with so many concerts spread over the city even two days demands serious decision-making and crisscrossing town. I was primarily focused on the concert-series of musicians collective The Community at Koncertkirken venue. This article will deal with concerts from that series only. Other concerts such as Jakob Bro Quartet, SÏN (Tim Berne, Kasper Tranberg, Petter Eldh, Peter Bruun), The Living Room (Soren Kjaergaard/Torben Snekkestad/Thomas Strønen) feat. Percy Persglove, Korpset, Fiil Free, LUX (Fred Frith/Lotte Anker/Magda Mayas/ Heike Liss) and Lillinger/Dell/Westergaard/Kjægaard/ Snekkestad will be dealt with in another article.

Apart from a lot of biking through the city, there was the special experience of staying at the old Hotel Astoria directly at the square of Copenhagen central station. It took some effort to learn how to switch on the lights in the hotel room at night, which, I learned was due to Danish heritage listed regulations that don't allow replacement of a lot of fittings in the rooms and the building. The building was designed as a station hotel for the Danish State Railways by Ole Falkentorp, who had started his career in the State Railways' design office before forming his own practice. The hotel was built between 1934 and 1935 as the first luxury hotel in Copenhagen. The revolving doors at the main entrance, the first in Denmark, the wooden room doors and many other details are still present, and one of the luxury rooms has been maintained exactly as it was in 1935.

There are a lot of special memory flashes of these two days. Among them the kindness of Lars Thor Jensen of Jazz Denmark, the beautiful long sustained tones of saxophonist Lotte Anker, the percussion work of Jon Christensen, the (quite different) groove seizing moments of Mia Dyberg and Signe Emmeluth, the visceral bass playing of Asger Thomsen, the shadowy sounds of drummer Dre Hocevar, the intensities and cosmic blue moments as well as the moments of hesitation at the concert of Jakob Bro's quartet, the fiery energy of Lillinger e.a., the walking energy of Peter Gannushkin, the inspiring talks with Nigel Slee of Jazz North from Leeds, the almost frightening killer energy of Petter (Eldh) and Peter Bruun, the rhythm section of Django Bates' Beloved Trio and many more.

Koncertkirken is a wonderful Copenhagen venue in a church building in the Nørrebro neighbourhood at Blågårds Plads. As many other Copenhagen venues as well cafes, libraries etc. it takes part with its own program under the umbrella of the Copenhagen Jazz Festival.

Left-field musicians of the young generation in Europe are often organized in more or less tight collectives as a way of exchange, mutual support, cross- fertilization and self-organization of business (festivals, booking, recordings, record label). One of these collectives is The Community founded in 2014. The Community, founded by and mainly organized by saxophonist/ conductor Nana Pi and saxophonist Mia Dyberg, "is a network and event organization, which is connecting and expanding relations between improvising musicians worldwide—by making events with interaction as the driving force!" From 2014 onwards numerous events have been organized. A recent one was a series of concerts at the Copenhagen venue Koncertkirken as part of the greater 10-days Copenhagen Jazz Festival. The series comprised eight performances: a solo by Slovenian pianist Miha Gantar, the Nana Pi Extemporary 9 Ensemble, a solo by Slovenian drummer Dré Hočevar, The Mia Dyberg Trio, the trio Aardestrup/Vestergaard/Kjæer, Emmeluth's Amoeba, a solo by Norwegian trumpeter Erik Kimestad and the Asger Thomsen Kvartet. This article covers three of these, the solo concert of Dré Hocevar, the Mia Dyberg Trio and Emmeluth's Amoeba.

Dré A. Hočevar, the man wearing his trench coat like trumpeter Lester Bowie wore his white lab coat, started his performance not on the drums but on the piano with wandering sounds with no graspable direction before working on the drum set's components. His solo performance became one of a kind. The audience was seated in a circle with its back turned to the drum set so that the action on the drum set was not visible. The audience had to rely solely on its ears, a means to sharpen perception of sound emerging from Hocevar's unconventional work on the drum set, eliciting close listening. Unconventional here means that Hocevar brought forth a lot of sounds you would not expect from or attribute to a drum set. These sounds were not mere spielerei-effects but had an axial place in a greater orchestral whole. In this manner an airy orchestral piece of shifting sounds unfolded, progressing in exciting ways and direction. Hocevar not only performed sitting behind the drum set, but walked around with cymbals and assorted percussion making well-dosed use of the reverb of the church's space thereby producing sounds circling around. It was a(nother) witty and musically valid attempt of this musician to go beyond existing performance rituals and routines.

The young generation of 'free' musicians can build on their predecessors' achievements. They are now free(d) to switch between different modes of playing and thereby create their own voice, bold jumps and sharp furrows of sound and music. This trio of alto saxophonist Mia Dyberg, bassist Asger Thomsen and drummer Dag Magnusen Narvesen, a Berlin-Copenhagen connection, turned out to be highly energetic, bold and subtle, wild and melodic, far out and far in, visceral with an emergence of deep groove. The trio celebrated the release of its Clean Feed debut Ticket! . It is a trio distinguished by its refined fabrics of sound and its permeating inner pulse. Its music lives by sensible alternating modes, dynamics, and temperatures more than by merely forcing it up linearly. It is open improvisation with emergent moments of strong rides in the groove as well as moments of lyricism in a newly invented and reconquering strategy of dealing with different modes of playing. It was pretty stunning how Thomsen and Narvesen effortlessly and naturally switched between microtonal, atonal and tonal-melodic and riffing modes of playing. When listening with eyes closed a sudden smiling brainwave of "oh, I never heard Paal Nilssen-Love play so lyrically" came up. It seems there is some clear continuity here too.

A crucial and mysterious thing is how listeners can or cannot connect to the energy and flow of the music of open improvisation. Dyberg seems to be conscious about that and helped it a little bit by referring to her heart beat and invited the members of the audience to focus on their own during a piece. Here is a reaction from the audience:

"I loved the tune Mia's Pulse where she took the tempo from her own heartbeat and encouraged us to check our own to compare while they played to see if we had synchronized."

It is interesting to know that Dyberg used the flow of a human voice as point of departure and inspiration for the playing of her trio, namely the speaking voice of US-American writer William S Burroughs (1914-1997) with its inescapable dark sonority, crumbled timbre and conjuring cadence. Dyberg mentions especially pulse awareness, cut up technique as compositional device and "the silver smoke of dreams." The musicians used to listen to readings and radio experiments of Burroughs and started to play right away when Burroughs' voice was cut. A reviewer, Andrew Spragg (The Quietus), describes Burroughs' voice as having "the quality of one speaking beyond the grave, a croak that is authoritative and ravaged in equal measure. It is the voice that creaks out from a dark alley and nests under the skin. It is the voice of a PI trying to catch a final hopeless break, or a radio broadcaster making his last transmission from some strange inter-zone. It is a voice that possesses the listener, absorbs them, never betraying itself through emotion. It is control in its purest form, clinical, paranoid and alien. Hiding here, in plain sight, is a voice from the void." This should be enough encouragement to attend a concert of this trio or/and listen to the album.

Emeluth's Amoeba came from the same planet of open improvisation but in a different elaboration. Danish saxophonist Signe Emmeluth originates from the Trondheim school—like her fellow musician Mette Rasmussen. Emmeluthis of a different temperament, a great impetuous player pushing up and forward with great force.

Among others she is heading the group Konge with Mats Gustafsson, Ole Morten Vågan and Kresten Osgood. The quartet consisting of Karl Bjorå on guitar, Christian Balvig on piano and Ole Mofjell on drums started with an überhectic passage of headache music to burst after a while into a great explosive groove. But as it is open improvisation it's not first choice to dash through, caged in the same dynamics. Instead the group went into highly energetic hyper rapid intricate rhythm patterning. It initially seemed that through this acceleration things threatened to muddle and fall apart, leaving loosely tumbling particles swirling around. The group took the risk and arose, so to speak, as a phoenix from the ashes. It arrived at a higher level giving leeway to chasing and jumping through marked territories thereby imposing its wildly blossoming protrusions and skeins, always keeping up explosive tension. There is an attitude of fearless exploration and a strong survival urge in the wild cosmos of sound.

Referring to the dancing movements of the polyp naval plant the group themselves describe their music making as uniting "Space and chaos, lyrical yet mysterious melodies and fierce dramaturgy ... in playful playing, where curiosity is a keystone" (for further details see Eyal Hareuveni's informative review).

The concerts of Dré Hocevar, the trio of Mia Dyberg and the quartet of Signe Emmeluth turned out as three quite clearly distinguished approaches and elaborations of open improvisation. All three are strong examples of musicians of the young generation giving shape to their very own voices. They act from a different life experience in a different production situation with different prospects. Old opposites disappear new opposites emerge.