Home » Jazz Articles » Blues From the Bayou: The Rhythms of Baton Rouge by Julian C. Pipe...

Blues From the Bayou: The Rhythms of Baton Rouge by Julian C. Piper 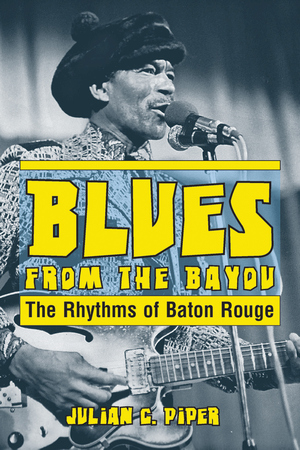 History may be told horizontally or vertically or some combination of both. Some historians give a 360-degree panoramic view of their subject, while others drill down deep into a single period of time. An example of the former is the newly revised Rhythm and Blues in New Orleans (Pelican, 2018) by John Broven. An example of the latter is what Julian Piper does in his slim, fact-filled volume, Blues from the Bayou: The Rhythms of Baton Rouge. Piper is part of the story, making this as much memoir as historical study. This is a late 1980's history at the ground level where the author has the same dust on his shoes as his protagonists. Rather than blatantly voyeuristic, it is a story told among friends sharing a cold beer beneath the stoop on a hot Louisiana day.

Piper came to Baton Rouge for a year while addressing an American Studies degree at University of Exeter. In his third year, at the age of forty, with a pregnant wife, Piper came to Louisiana State University. His introduction to the area came through his British blues band touring with Baton Rouge native Lazy Lester (AKA, Leslie Johnson) who served as Piper's introduction to the sacred area. This book documents the author's year in America, focusing intensely on the local blues scene and musicians. Through Piper's eyes we meet the blues musicians of the Baton Rouge area, both living and dead. Piper's experiential ground zero was Tabby's Blues Box, located on North Boulevard in Baton Rouge. Originally founded in 1979, during the bright rise of Disco music, proprietor Ernest Joseph "Tabby" Thomas (1929-2014) maintained the city's only blues club until its closing in 2004 after Thomas suffered a stroke.

It was at the blues box that Piper met the cast of characters who fill his book. Lightnin' Slim (Otis Verries Hicks) (1913—1974), Lonesome Sundown (Cornelius Green III) (1928—1995), Neckbone Slim (Bruce Lamb), Raful Neal (1936—2004), Lazy Lester, and Thomas himself are all featured, as well as Thomas' son Chris Thomas King (who played Tommy Johnson in the Coen Brother's film O Brother, Where Art Thou (Buena Vista Pictures, 2000)) and Neal's son, Kenny Neal, both of whom have experienced great success. Piper also addresses the looming names of the city's blues past, first focusing on Robert Pete Johnson (1914—1980) and then Slim Harpo (James Isaac Moore) (1924—1970), whose composition "Hip Shake" sent him worldwide after its cover on the Rolling Stones' Exile on Main St. (Rolling Stones, 1972) .

Piper's book is more of a downhome, less academic treatise than William Ferris' Blues from the Delta (Anchor, 1978), which was recently followed by a Dust to Digital release of Voices of Mississippi: Artists and Musicians Documented By William Ferris (2018). Both books capture a set period in a set location, but Piper's book is somehow "friendly" though no more valuable than Ferris.' The artists exposed by these works are those that were better regionally known than they were world-wide household names. These micro-histories possess a certain authenticity that blues reportage before never had. They are not saturated with the American Romantic Darkness as many published before.

I personally gravitate to Piper's account as I had experienced something of the same in the 1980s while attending graduate school at Ole Miss. I had the opportunity to live and travel in much of the Mississippi Delta region, meeting many of the blues artists performing at that time. It was an experience that changed my entire view of music, race, class, and culture at large, things woefully neglected by the majority of Americans today, judging by our present circumstances, where the only constant seems to be malignant prejudice and racism that never goes away. Music has the power to conquer such.