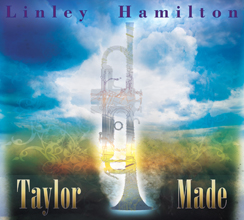 Trumpeter Linley Hamilton is a central figure in the burgeoning Northern Ireland jazz scene. He's an experienced musician, with a résumé that includes work with Van Morrison, Ken Peplowski and Jean Toussaint; being a broadcaster, whose Radio Ulster After Midnight program showcases new jazz; a writer and producer. Above all, he's a man with a genuine love of jazz and a desire to support and develop the music. It takes no more than a few bars of "Without A Song," the opening tune on Taylor Made, for Hamilton to transmit this love through one of the warmest and most welcoming of trumpet sounds.

Hamilton is joined on Taylor Made by three musicians from Dublin. The trio is consistently superb; just how importantly Hamilton views pianist Johnny Taylor's contribution can be inferred from the album's title. The leader is being unduly modest—his horn playing is very much the album's crucial musical center—but Taylor, American bassist Dan Bodwell and drummer Dominic Mullan certainly enhance the tunes.

Hamilton's trademark tone is breathy, soft, almost whispered at times—on occasions, his sound is so subtle that it risks getting lost in the mix. While it has something in common with Chet Baker or, on the up-tempo "Happy People," Warren Vache, in terms of contemporary horn players it sits more comfortably with European musicians such as Till Bronner, Verneri Pohjola or Julian Wasserfuhr. "Fade a Little," written by Wasserfuhr and his brother Roman, is Taylor Made's sparsest tune, the minimalist approach of all four musicians creating a spacious and gentle mood.

The album's tunes show Hamilton's appreciation of a great melody, whether it stems from the jazz classics or from more contemporary compositions, and his ability to rework such melodies to focus on less obvious aspects of their construction. This ability is highlighted on Gerry Goffin and Carole King's classy "Will You Still Love Me Tomorrow," where the band stretches some phrases, shortens others, removes one or two, and creates a languid and slightly mournful ballad that heightens the song's sense of loss.

Best of all are Hamilton's swinging, upbeat, joyous arrangements of Rodgers and Hart's "This Can't Be Love" and Kenny Garrett's appropriately titled "Happy People," with the band in terrific form on both numbers. Bodwell's deep, rich and tough bass line drives "Happy People," while Taylor's deft piano playing fits neatly into the spaces left by Hamilton's positive and cheerful horn part. On "This Can't Be Love," Bodwell, Taylor and Mullan kick off with an irresistibly swinging rhythm that sets up Hamilton's entrance perfectly and takes all four players careering along for the rest of the tune.

Taylor Made is a delight: full of warmth, swing and melody. Hamilton and his fellow musicians have put together an engaging and accessible album that showcases their undoubted talents and establishes Hamilton's credentials as a fine horn player.

Without a Song; Fade a Little; Happy People; My Heart's Desire; This Can't Be Love; Throw It Away; Will You Still Love Me Tomorrow; Have a Good Time; Rosewood.