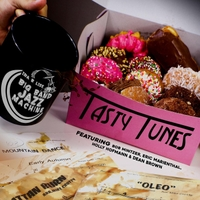 Tasty Tunes is the fifth CD by Ira B. Liss' stalwart San Diego-based Jazz Machine, which was formed almost forty years ago, in 1979—a span that, when reckoned in big-band years, is much closer to a century or more. While other bands have come and gone the Jazz Machine has adamantly stayed the course, presenting dynamic big-band jazz to its southern California audiences without watering down the leader's guiding principle, which is to ensure that the music is always creative and swinging.

As is true in other areas of endeavor, big bands can often be measured by the company they keep. In other words, who has signed on to reinforce the ensemble—and who is writing the charts? On Tasty Tunes, the Jazz Machine's guest artists —tenor saxophonist Bob Mintzer, guitarist Dean Brown, alto Eric Marienthal, flutist Holly Hofmann —bring with them long and impressive curriculum vitae (in other words, resumes). As for the arrangers, they include the likes of Mintzer, Brown, Tom Kubis, Eric Richards, Mike Crotty, the late Peter Herbolzheimer and Mike Abene—for big bands, it doesn't get much better than that.

Mintzer solos smartly with pianist Steve Sibley and guitarist Alex Ciavarelli on his well-grooved composition, "When the Lady Dances," Brown with Ciavarelli, Sibley (electric piano), soprano Christopher Hollyday and drummer Charlie McGhee on his rhythmically persuasive "Recon," which rings down the curtain. Marienthal is superbly showcased on Kubis' fabulous arrangement of the Ralph Burns / Woody Herman classic, "Early Autumn," Hofmann (on alto flute) with vocalist Janet Hammer on Carl Murr's tender treatment of the Nat Cole mega-hit, "Nature Boy." Hollyday, who has flown under the radar for several years (great to hear him again), unleashes a smoking alto solo on the flag-waving opener, "You Don't Know What Love Is" (arranged by Richards), leading to decisive statements by Sibley and trumpeter Peter Green. Crotty's arrangement of Sonny Rollins' sinuous "Oleo" (featuring the saxophone section) is another highlight, as are Green's and Randy Aviles' dueling trumpets on "Over the Rainbow." Hammer is heard again on Rodgers and Hart's "I Didn't Know What Time It Was" (arranged by Drew Zaremba) and Tracy Coleman's instantly forgettable "Ya Turn Me On Baby." Hammer sings on-key and with no needless frills.

Completing the session are Crotty's arrangement of Daniel Freiberg's modish "Manhattan Burn" and Herbolzheimer's of Dave Grusin's lively "Mountain Dance." Solos on "Burn" are by Ciavarelli, Green and alto Tyler Richardson, on "Dance" by Ciavarelli and Sibley. At a time when most big bands that remain active are running on fumes, it's good to know that there's an ensemble in sunny San Diego that keeps on fighting the good fight, doing its utmost to keep the flame of big-band jazz alive and burning in its wee corner of the world. Here's wishing the Jazz Machine many more prosperous years.

You Don’t Know What Love Is; Early Autumn; I Didn’t Know What Time It Was; When the Lady Dances; Oleo; Nature Boy; Manhattan Burn; Over the Rainbow; Mountain Dance; Ya Turn Me On Baby; Recon.