BY GLENN ASTARITA
November 15, 2018
Sign in to view read count 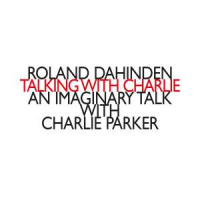 There have been numerous Charlie Parker tributes over the years, which is to be expected, yet Swiss trombonist, composer Roland Dahinden is no stranger to thinking outside the box via his contemporary classical experience, performing pieces written for him by the likes of Anthony Braxton, John Cage and Daniel Wolf. He's also a jazz improviser and highly regarded 'idea man.' This album signifies the output of his compositions based on imaginary discussions with Parker, interpreted and executed by this multinational quartet. In a sense, Parker is bridged into avant-garde musings, as these works are rendered with swaying and fragmented conversations, swarming with impassioned and jarring musical speak.

In case anyone is wondering, this is not casual listening fabricated with easy-to-grasp storylines. It's more like an undulating ebb and flow via disparate perspectives and strident outbreaks. And the musicians' imagery projects a musical vernacular that is devoid of a formal language, which of course is the realism behind it all. But these aspects are driven home amid the artists' telepathic discourses. It is perhaps the most interesting aspect of the entire program, as the musical content is seemingly a process, where the listener is given an opportunity to delve into Dahinden's fertile imaginative powers.

Dahinden's gyrating currents include perplexing micro-themes, edgy upsurges and moaning horns, aligned with a surfeit of emotive aspects, leading us to believe that not all these imaginary conversations are serene or amiable. However, the quartet turns the temperature down on the low-key "Drift," although the clarinetist's spry choruses initiate a bit of mayhem, aided by Garcia's flickering drum patterns.

Call it what you will: Avant-supernatural, esoteric, or loosely structured chaos and so on, yet it's an album that invites the listener into Dahinden's somewhat phantasmagorical excursion, lucidly portrayed by the quartet's perceptive enactment of the program's core theme.