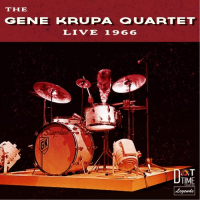 This was a period, late in Gene Krupa's career, when he really wasn't up to much, or so some critics said. Whether that's fair or not is not for me to say. When Krupa appeared in the summer of 1965 at the Steel Pier in Atlantic City he only rated second billing to The Supremes. He didn't seem to care. The band he had was, with the exception of Eddie Shu, this one. If you were young and impressionable, you might be forgiven for thinking they played a lot of music. True enough, Krupa had his warhorses, and "Big Noise from Winnetka" likely followed him everywhere, as did "A Train" and "Drum Boogie." Krupa's taste for novelty in the later years of his life is perhaps best left to a wiser critic. He did not go through the motions, as anyone who witnessed his performances up close would say, nor did he do so here, perhaps a year or so later.

So much has been written about Krupa this space is surely better devoted to two of his exceptional sidemen, neither of whom are—or perhaps were—household names. Dill Jones was his pianist, a lovely man, and a player of wide-ranging stylistic abilities. As he demonstrates on "Alligator Crawl," he was at home with Fats Waller, and in Atlantic City (not on this disc) he played a stunning chorus on "Dark Eyes" that just seemed to levitate the bandstand. He and Krupa seemed simpatico, as they do on this live recording, and while Jones never quite achieved the notoriety of John Bunch, Krupa's other go-to-pianist, Dill Jones was exceptional. He deserves to be more widely remembered.

The reed player on the "Steel Pier" was Carmen Leggio, who must have been coming from or going to Woody Herman at the time. Krupa obviously preferred players cut out of the mold of Lester Young, and another stalwart he featured was Eddie Wasserman. Eddie Shu was not much more than a name to me before this recording, but what a revelation. Yeah, there were Prez stylings and shadings, but Shu brought a lot more to the table. John Coltrane, for one, had gotten into his ears, and if that sat a bit oddly with Krupa, you don't really notice. The stunner was Shu's facility on the clarinet (who knew he would or had appeared on that instrument with Louis Armstrong, and he is featured here to great advantage" on "Honeysuckle Rose." If anything, Shu was an even better harmonica player (he started his career on it) and if that isn't enough, comes in with a sort of swing to boppish chorus on trumpet no less during "Drum Boogie." For a second you'd think you were listening to the wrong recording, you know, "Where did that come from?" Talent, you know? Shu was a virtuoso player who flew under the radar, and he was, as the saying goes, deserving of wider recognition.

This is another outstanding document in the Dot Time Legends series. It's worth hearing, if only for the surprising brilliance of Dill Jones and Eddie Shu. Like others in the series, it is impeccably produced and re-engineered.