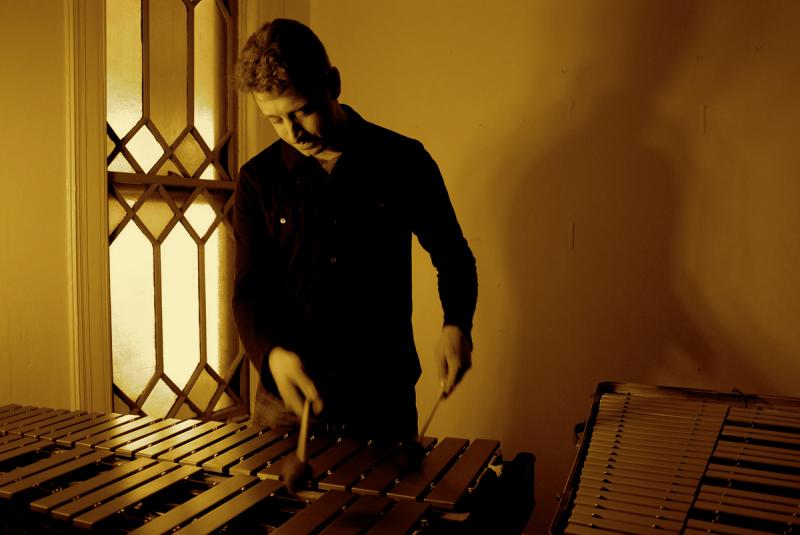 Your sound and approach to music: I just like music—I don't really get too hung up on styles. My theory is simple—if it's something that I don't get sick of hearing, then it must be good. I just want to make good music/

Your teaching approach: I teach little kids from day one how to play with other people. For example, when I teach drum lessons, I play a lot of piano. And when I teach piano lessons I play a lot of drums. It's fun, it's music, it's teamwork, and most importantly kids learn right away that music is fun.

Too many people to mention, although I would love to work with Björk somehow, someday.

Road story: Your best or worst experience: I once broke three mallets on a gig and had to play the last set with only one mallet. It was a great learning experience on playing simple swinging improvisations for me.

Jazz im Sagewerk, Bad Hofgastein, Austria. Everything was amazing—and it's in the middle of the Alps.

Your favorite recording in your discography and why? Honestly, I'm really proud of my newest record, which will be released in 2011.. but I'd be lying if I didn't include Fade, and also a rock album called Hide and Go Seek, which I did with my best friend in a band called Elephantbear. Check it out—it's great...

The first Jazz album I bought was: I'm not sure if it's the first I ever bought, but the first one I was really obsessed with was My Favorite Things, by John Coltrane.

What do you think is the most important thing you are contributing musically? I try to just get the right people and mood and let the music happen naturally. I put a lot of thought into the compositions, but I don't really think too much about my own "contribution," so to speak. I think my overall message that I want to come across when I play and record is fun, fun, fun.

I was a left-handed pitcher when I was younger. I threw a no-hitter—but we still lost. Now I relive my baseball memories by watching reruns of old classic games... Bill Mazeroski anyone?

What is in the near future? Lookout for my new record, Castles and Hilltops, featuring Danny Grissett, Matt Clohesy, and Tommy Crane in 2011.

If I weren't a jazz musician, I would be a: Radio/TV announcer for the New York Yankees.