By Dan McClenaghan
January 22, 2011
Sign in to view read count 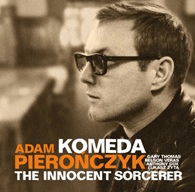 Polish saxophonist Adam Pieronczyk pays tribute to his to his country's jazz pioneer, Krzysztof Komeda (b.1931, d.1969), with Komeda: The Innocent Sorcerer.

Pianist/composer Komeda is better known for his film work, in the United States, than for his jazz work. The title of the CD is taken from the soundtrack he composed for the 1960 Andrezej Wadjda film of the same name. He also wrote music for films of Ingmar Bergman and, most famously Stateside, for Roman Polanski films including A Knife in the Water (1962) and Rosemary's Baby (1968). For jazz fans familiar with Komeda, it is most likely in the context of his mentoring trumpeter Tomasz Stanko.

Adam Pieronczyk, born in 1970, shines a sparkling light on the work of Komeda without trying to imitate the master. Rather than employing piano, he chooses guitar, for a sound that lightens the moods and buoys up the atmospheric Old World drift of his beautiful, sometimes amorphous music.

The opener, "Wicker Basket," written for a Polish cartoon, has an introspective and slightly morose mood. Spacious and laconic, Pieronczyk's tenor sax adds a haunting quality that counterpoints Nelson Veras' light-toned acoustic guitar. "Kattorna" is from another soundtrack, and was included in Komeda's best-known album, Astigmatic (Polski Nagrania Muza, 1966). The leader's soprano sax gives the tune an astringent tang.

Lukasz Zyta's percussion work on "Kattorna"—and throughout the album—is quirky and masterful. He approach is crisp and succinct, as much punctuation as it is propulsion. He eschews big cymbal splashes and employs a variety of instruments that are difficult to identify since his contribution is so well incorporated in the ensemble. The dry shimmer of maracas and the jangle of a tambourine play into the beat, as well as the flat click-clack of a manual typewriter on the ominous "Sleep Safe and Warm," from Rosemary's Baby; there are times it sounds as if he is using kitchen utensils to create a controlled clamber on pots and pans, with remarkable skill and finesse.

"Crazy Girl" is the album's most lighthearted tune, as bright as a situation comedy theme song. "After the Catastrophe" scratches and drones into a gloomy soundscape, with Pieronczyk's soprano injecting some gathering hope.

It is said that Krzysztof Komeda injected a fresh, European aesthetic to jazz. Adam Pieronczyk reveals a fresh side of the pioneer's artistry with Komeda: The Innocent Sorcerer, a magnificent and compelling recording.