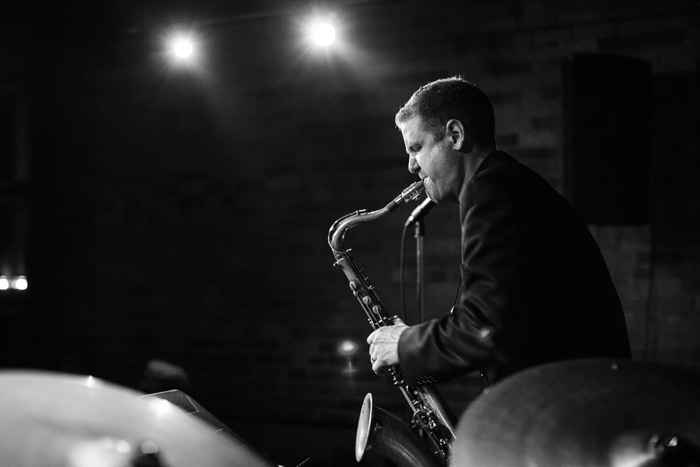 Juno-nominated, Toronto-based saxophonist, Ryan Oliver honed his craft in Canada's west coast before moving to Amsterdam, Toronto, and then New York. Since returning to Toronto, he has maintained a busy schedule as one of Canada's most in-demand saxophonists. Oliver has toured in India, Australia, New Zealand, the United States, and Canada with the legendary eclectic jazz group the Shuffle Demons. He is also a member of Juno Award-winning blues/rock performer Derek Miller's group. The band has traveled throughout North America, including performances at the New Orleans Jazz Festival, the Aboriginal Achievement Awards (broadcast on CTV), and Toronto's Dundas Square. Oliver is featured in the horn section on Derek Miller's most recent recording, Derek Miller and Double Trouble, featuring Stevie Ray Vaughan's heralded rhythm section, Double Trouble, and music icon Willie Nelson. The recording was nominated for a Juno in 2011.

Ryan Oliver's debut recording, Convergence, was selected by CODA Magazine as one of the top 10 Canadian jazz releases of 2007. He has received numerous Canada Council and Ontario Arts Council grants for touring and recording and has performed at most of the major jazz clubs and festivals throughout Canada. Oliver's straight-ahead and tough-toned tenor can be heard often in Toronto. He maintains a weekly Sunday night residency with Organic, a quartet that features Canadian great, Bernie Senensky, on the Hammond B3 organ, along with being a member of The Cookers, a hard-bop quintet, and Tonight at Noon, an octet that plays the music of Charles Mingus. Jazz education is also an important part of Oliver's professional life. He has been a featured clinician at Malaspina College, Western University, the University of Windsor, and high schools throughout New York, New Jersey, Alberta, British Columbia, and Ontario. Ryan Oliver's driving melodic inventiveness, charismatic sound, and swinging time feel light up bandstands wherever he plays.

My first teacher was Michael Butterfield, in my hometown of Williams Lake. Michael introduced me to a lot of great jazz, including the music of Dexter Gordon, John Coltrane, and Sonny Stitt. While at Malaspina College in Nanaimo, I studied with guitarist Pat Coleman. I have also studied with Pat La Barbera, Eric Alexander, Ralph Bowen, and Victor Lewis.

My musical style is rooted in the saxophone tradition and hopefully presents my take on it. The main players that have influenced me are John Coltrane, Dexter Gordon, Sonny Stitt, George Coleman, Pharoah Sanders, and Victor Lewis.

I was 15 and started getting into the saxophone on a serious level. I couldn't really see myself doing anything else.

My approach to music is simple. Listen, project, swing hard, learn tunes, and play within the music. I want to make any group I am playing with sound good and improvise within the context presented by the group. This approach allows me to play with a wide variety of groups, from straight ahead standard jazz, to the eclectic music of the Shuffle Demons, and to the electric blues-rock of Derek Miller's Bliss Fiasco.

The list would be long, but a few of my heroes still on the scene include Harold Mabern, George Cables, Rufus Reid, Victor Lewis, and Jimmy Cobb.

My latest recording Strive! It features Victor Lewis on drums and I was honored and humbled to have the opportunity to step on the bandstand and into the recording studio with this jazz legend. I am proud of the compositions and the sound of the band.

Trying to maintain the importance of tradition in the music—learning tunes, swinging, then trying to carry those ideals into original music.