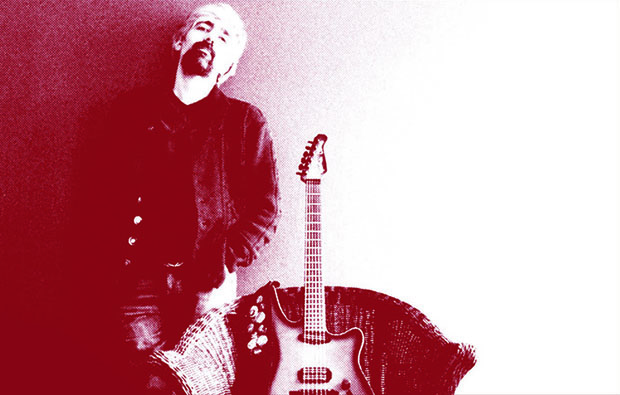 BY PHIL CAVALIERI
May 27, 2012
Sign in to view read count
Meet Phil Cavalieri:
Born in 1974, Filippo "Phil" Cavalieri grew up in an era where jazz-rock was at its peak. His formative musical years took place in Ferrara, Italy, where he played in the clubs with all kinds of bands playing everything from Jimi Hendrix to Barry White. As he was learning his instrument, Phil was influenced by Santana, Jerry Garcia, Jimi Hendrix, and the guitarists of the classic rock bands of the seventies. Even though Cavalieri claims to be more of a blues-rock player, it was the influence of jazz that led him to the style of playing and composing in a different way of look at the improvisation.

Cavalieri started to play as pro in different bands around Italy in the mid-'90s and, since then, has proven himself as a world-class player and composer. In 2000, he started to play and compose with an independent label called Stranisuoni and worked in different projects with the Italian pop singer Luca Bui, bringing his new tunes to a national broadcast. After this experience of commercial music he turned back to jazz and started again with a new series of studies that took him far from the music for a full immersion research in how to create a personal way of playing and compose. He attended classes by a new generation Italian jazz players like Paolo Ghetti and Fabio Petretti, and graduated with a study of John Scofield's music.

Cavalieri's new way as independent artist started with a new composition that reflected the interest of the outside playing of Scofield and recent Wayne Krantz. The result is his new self-produced release, The First Third, that mixes outside playing and a bit of psychedelia ("Never forget the Grateful Dead!" seems to read between the guitar strings), where Phil plays different instruments on every tracks—of course, with guitar as the main instrument. The album will be sold on CDBaby and fusion label Abstract Logix websites.

He currently teaches at Ferrara Music school of Modern Music and he is now writing his method of outside playing for fusion jazz guitarists, a revolutionary way for students to study the pluralities of outside playing with guitar.

I knew I wanted to be a musician when...
When I was 16 I understood that I liked jazz more than other music, and I wanted to figure out what was inside that beautiful and difficult music that changed my way of look at it...and the guitar.

Your sound and approach to music:
My music often looks for outside elements both in melodies and solos. The most important thing is to build a strong theme; that, for me, is the strongest elements in a song. By the way, the rhythmic elements must rule in the solo, where the music must be made, not only with scales, but first of all with intervals used in rhythmic combinations.

Your teaching approach:
I want to build awareness in every student about the musical elements they like. They must learn the scales and the modes but first of all they must try to figure out their personal way of doing things, which can be even harder. I don't want to listen to students that play in the same way; they must understood what they like in other musicians and find what they can use in their own way, even for solos and writing.

Your favorite recording in your discography and why?
Shakti—I love John McLaughlin's Indian stuff All the recordings by Tom Harrell—I love his way of playing and writing songs. Reflection, by Wayne Krantz—he is a player that always looks for a new way of playing guitar. All the recordings by John Scofield—I think he has always been able to achieve the perfect tone when he plays outside.

The first Jazz album I bought was:
A big band vinyl album; I don't remember the title any more, but I was 14 years old and I thought it was such a cool sound.

What do you think is the most important thing you are contributing musically?
I think that I'm trying my best to play without trying to sound like any other player. It's so difficult; I'm certain that only this can help bring out new music from my strings. I think that searching for new music is endless work, but I want to shoot myself, as in a photograph, during this musical process, and I hope to find people that want to listen to my ideas and who might join me in this kind of project.

CDs you are listening to now:
Mostly A lot of Wayne Krantz, especially