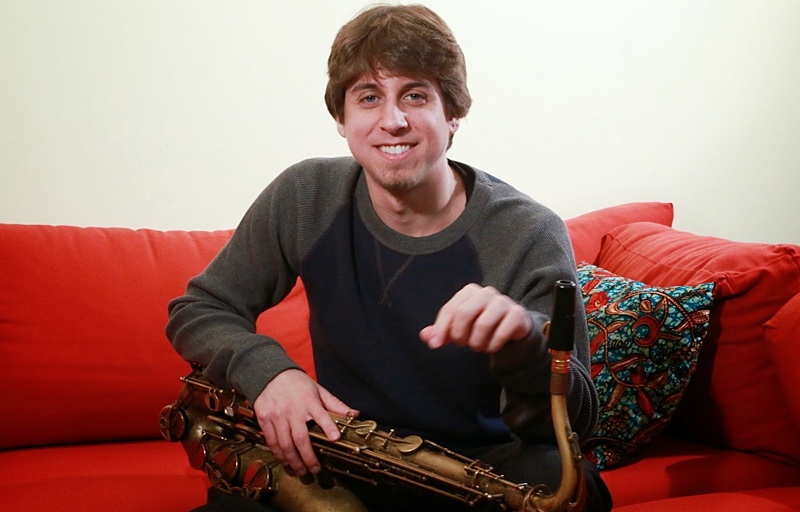 BY MICHEL NIRENBERG
March 17, 2015
Sign in to view read count
Meet Michel Nirenberg:
Michel Nirenberg is a Brazilian saxophonist and composer who has performed and recorded in North and South America with some of the leading names in Latin jazz. His first CD as a leader entitled Retrato/Portrait will be released in spring of 2015. It features leading Rogerio Souza, Dani Cortaza and Alex Brown along with Leonardo, Alejandro and Bruno Lucini.

Teachers and/or influences?
I had many teachers that were major influences including Daniela Spielmann, David Pope, Jose Rua, Pedro Bitencourt (saxophone), Jose Botelho (clarinet), Claudia Castelo Branco (piano). For a long time I had a big classical music influence on my life, and later I began listeingg to all types of music, like jazz and lots of Brazilian music (choro, samba and baião, maracatu) and big names like Hermeto Pascoal and Egberto Gismonti.

One of my major influences was my grandfather Jaques. He was my first music teacher, and introduced me to the violin when I was just a little kid, and always supporting my dream to become a high level professional player. Until this day, I consider him the most important person in my musical career.

His family fled Europe before the war, going to Brazil before the Nazis took over. Music was already a strong tradition back then and my grandfather became a highly accomplished violinist in Brazil, keepng this tradition alive by passing his musical knowledge on to each new generation.

I knew I wanted to be a musician when...
I always felt that music was part of myself, you know? Like being a skinny man, I was a musician. Maybe because I had a strong musical influence from my parents (my father plays classical viola, and my mother piano, as well as my brother, cousins, etc.) studying music was always a natural thing. When I started to apply for college was when I decided to take it seriously as a profession.

Your sound and approach to music:
I'm not sure how to define my sound. I had the chance to listen and absorb many styles of music that I like, and I guess my music is the result. When I was around 17, music became the center of everything, and my entire life started to be ruled by it: practicing, reading, studying, and writing. Music became almost like a religion, ahead of other subjects in my life.

Your teaching approach:
It depends on many things. First of all, patience. That applies to all ages and it's important to make students understand it. To become a musician and understand the beauty of music, you must accept the fact that it is a process, and we will never know everything. Being humble and learning how to listen is, in my opinion, the key to never stop growing.

Your dream band:
I would have to say that the band that helped me record my album Retrato/Portrait is a dream band. Working with musicians on this level is amazing. Alex Brown is a super talented pianist and Alejandro Lucini is an incredible drummer. Having guitarists Rogerio Souza and Dani Cortaza with me is another great addition, each one with their own style and talents and Bruno Lucini added beautiful percussion. Leo Lucini, my partner on the project, is a wonderful bassist and important mentor I look forward to the concerts we'll be doing together.

Every time I meet wonderful artists who express their art through music, and give me the chance to share with them, it's some kind of dream band happening. One day I'd like to be able to run my own orchestra with musicians like these, but that's another project that hopefully one day will happen.

Road story: Your best or worst experience:
I have two stories. Both are good but very different. I'm not sure if you all know how carnival in Rio is, but it's totally crazy and awesome! Hundred of street bands are playing traditional carnival songs and there is other theme music all over the city. I was part of a themed group called "Zoo Bloco." We were a small band, with horns (brass, saxophones and everything else you could make a sound blowing) plus percussion, and we only played songs related to animals. It was really nice and we had lots of kids dancing and singing with us. One day I decided to really get into the idea. So, I went to downtown Rio to buy a costume. Oh, but I was not only getting some pretty hat or other accessory, I was investing hard! When the parade day came, I was the most beautiful, charming, kickass orange spider that has ever played in carnival! Me and my alto sax led the band forward against that wonderful Rio landscape. We played for hours on a super hot summer day, but it was worth it. At the end, despite everyone being absolutely exhausted, you couldn't see one person without a smile on their face.

Another beautiful story involves my family. As I mentioned, many members are musicians and my first instrument was the violin. My brother and me used to go to my grandfather's house and have lessons with him, often with my father present. One day we were all invited to participate in the opening of a TV show. Me, my brother, my father and his father were invited to play a tune from Fiddler on the Roof. The TV show wanted to update their opening by having us play this beautiful tune together, showing how the music tradition was strong in our family. Today when I see all of us playing together, it is very touching to me. It is hard to describe with words how important my family was in making me become the musician I am today. The video catches the intensity and beauty of the occasion.

Favorite venue:
James Madison University Concert Hall and Recital Hall. By far the two most outstanding places I've ever played in terms of acoustics, personnel and organization. The university has its own department to take care only of both halls, and the people responsible for making it work are first-rate sound engineers.

Your favorite recording in your discography and why?
I like "Ã Deux" from my new recording Retrato a lot! I didn't give too much attention to this tune in the beginning, but after the recording it was so cool that it became one of my favorite songs!

The first Jazz album I bought was:
It was from a jazz collection that my mother gave me, from a newspaper in SÃ£o Paulo called Folha de SÃ£o Paulo. Every week they released a new book with a CD about a big name in jazz. I'm not completely sure but I think the first one I got was Charlie Parker's book. I loved it so much that I memorized his whole life (and his solos)!

What do you think is the most important thing you are contributing musically?
Right now my goal is to always be honest with the music and never force myself to be something (or someone) I am not. Being from Brazil, playing mainly Brazilian music, but also performing other music in the United States creates some kind of bridge. It positively links both cultures, which can be vastly beneficial to the music of both countries.

Did you know...
I wanted to be a soccer player when I was younger! I actually training hard as a teenager, but I had so many accidents (broken leg, fingers, foot etc) that eventually I was forced to decide if I wanted to be a professional athlete or musician.

How would you describe the state of jazz today?
As a new artist it's hard to get yourself known and establish a name if you don't have some kind of godfather to help you in the process. I know a lot of very talented musicians who are struggling to make their music. I think the jazz scene we see today with all the wonderful artists is probably only the tip of the iceberg if you look at the full underground scene.

What is in the near future?
We are about to release my first album as a leader and I'm really excited to present my music to the public. In the United States, I have an East Coast tour shaping up, and then I'll perform in Brazil.

What song would you like played at your funeral?
I have no idea, but please just play it well.

What is your favorite song to whistle or sing in the shower?
My shower playlist is so vast that it wouldn't fit in here.

If I weren't a jazz musician, I would be a:
An actor or comedian.