A dedicated teaching artist, Antoniuk has been featured at the Edmonton International Jazz Festival, the Vic Lewis International Band Festival and MacEwan Summer Jazz. He is artistic director of Maryland Summer Jazz and a master teaching artist with Washington Performing Arts Society and the Capitol Jazz Project, in conjunction with Jazz at Lincoln Center and Wynton Marsalis.

Teachers and/or influences? There are so many to thank. Let's start with Grant MacEwan College which was a junior college when I attended. There are things I learned from (now Senator) Tommy Banks that still help me in my career. At the University of North Texas, Jim Riggs was a huge influence. Then, after I had toured, recorded for a decade with Unified Jazz Ensemble, I got a grant from the Canada Council to allowed me to study with Tim Hagans. I especially focused on improvisation and soloing and, wow, it was a great experience. My best friends tell me it really changed my playing and "everything old was new again," as the the song goes. Certainly, being truly in the moment makes soloing great fun and a bit scary, but the results are fantastic. I think that's where I am now, when I'm soloing and I like it. Another influence is

I knew I wanted to be a musician when... I was in Junior High and went to the high school jazz concert. The lights, the stage, the guy playing the tenor sax solos...enough said.

Your sound and approach to music: I think rhythm, texture and shape first, and the rest follows.

Your teaching approach: Every student has to be approached differently, as everyone has a different style of learning and a different point of departure. I try to get inside a student's head, and try to imagine where they are coming from, what their experiences are and have been.

Your dream band: The Jazz Update is a great start! (Wade Beach: piano; Tony Martucci: drums; Tom Baldwin: bass). That's a funny question, because I've often said that the Jazz Update is my dream band. When I was ready to form my own band after leaving Unified Jazz Ensemble, I thought long and hard about who I'd most like to play with and I was incredibly lucky that they were available. Sure there are other players I dig. I've always loved Jack DeJohnette, John Scofield, Dave Holland, Dave Douglas.

Road story: Your best or worst experience: Traveling on the Trans-Siberian railway at night in February. It is -40F outside, and about 114F inside. I awake to a bad feeling in the pit of my stomach as I remember I've left the immigration papers I need to reenter the USA back home on my desk.

Favorite venue: I'd have to say in many ways the Gaylord National Hotel at the National Harbor on the Potomac River near Washington DC. I love playing at Yardbird Suite in Edmonton Alberta, Canada and we have a blast every July at the Maryland Summer Jazz Festival in Rockville, Maryland—short on sleep, but a great time musically and in making new friends.

Your favorite recording in your discography and why? "Screwball," the first song off my new CD was written for my son. Aidan is six years old, and in constant, motion (in many different directions). The song reflects his personality, and in spite of it having a lot of time shifts and wide intervals, he can pretty well sing the whole melody along with the track! The song is VERY challenging and my guys really pull it off! (Most non musicians won't have a clue about the complexity of this and many of the other tunes on Brotherhood,and that's a good thing!

The first Jazz album I bought was: Heavy Weather by Weather Report was the first.

What do you think is the most important thing you are contributing musically? My own personal take on the tradition of jazz, as told by a guy who wasn't there to hear much of it first hand. It's like the game "Telephone" where you whisper someone a secret, and the secret goes around the circle, person to person. By the time you get to the end, it may not sound much like the original, but very often it is much more interesting.

Did you know... I'm a closet greenie. I recycle diligently and keep the setting really moderate on the air conditioning and heat. I drive my wife crazy turning out lamps in empty rooms. I don't belong to any environmental groups, it's just a personal thing with me. It's the way I was raised, I guess.

How would you describe the state of jazz today? This is a really exciting time. We're still looking back intently on some great music from earlier decades, but there are so many new influences like world music styles and rap filtering in. As a composer, I love being part of the ongoing story.

What are some of the essential requirements to keep jazz alive and growing? Education. Jazz moved from the clubs to the concert hall, and from the concert hall to the classroom. Education and getting folks excited and interested in jazz is paramount. 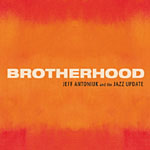 What is in the near future? Headlining at the "Juneau Jazz And Classics" Festival in last week of May 2010 with Ingrid Jensen joining us. That will be a really long and busy week and I'm really looking forward to it. Then we have plenty of gigs in Annapolis, Baltimore, DC and Western Maryland before the Maryland Summer Jazz Festival begins the last two weeks of July. I have two books coming out from Alfred Publishing. They're play-along books with CDs. I'm pretty psyched about Brotherhood, my latest CD with The Jazz Update. It is being released this week.

By Day: I'm a musician night and day. It gets tricky sometimes, doing without sleep. I can tell you the espresso machine in our kitchen was definitely a necessary business expense!

If I weren't a jazz musician, I would be a: I'd be a rocket scientist! I'm kidding, but actually I'd be a physicist working on cosmology/quantum issues. I was a physics major before I became a musician. I just couldn't put down the saxophone when it was time to "get real." I guess I found out "there's no such thing as the real world," because I am pretty much living out my dreams.