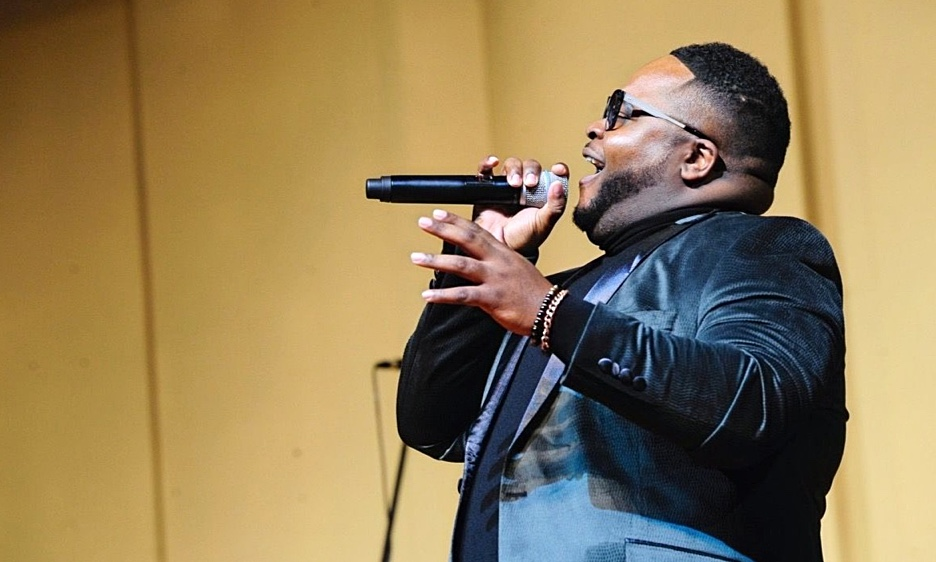 From the concert stage to jamming in Chicago's jazz scene, G. Thomas Allen is a multi-genre Singer/Songwriter and "one of the most compelling countertenors voices you'll ever hear. —The Musical Hype

Redefining the career possibilities of his rare vocal category, generally tied to classical music, he takes his play in the world of modern jazz. Paying homage to the post-bop era, he offers a collection of songs with the aesthetics of R&B, blues and Gospel roots. Bridging genres with an undeniable melodic blend of tradition and modernity, he is joined by vet Dennis Luxion on the piano (known for playing for Chet Baker in the '80s), bassist Jeremiah Hunt and drummer Gregory Artry (with special guest drummer Kyle Swan, saxophonist Sharel Cassity and keyboardist Andrew Tombs on single only). Allen is set to release his self-titled debut jazz album on July 3, 2020. Pre-order starts today (all major digital outlets) and you get the single, "It's Sunny" featuring award-winning trumpeter Marquis Hill.

Surprisingly, trombone was my first instrument and I played in high school for about a year and eventually had to stop; due to conflicting schedules with the choral program. And, of course, I wanted to sing more than play an instrument. But—I dabbled in piano, but mostly just for proficiency in college and to the extent of playing to facilitate a voice lesson.

I was lucky to have awesome public-school Music Teacher(s)—shoot out to the Danville Public School system. They were invested in my development as a singer and helped to shape my fundamental understanding of music. One music teacher that stands out is Debbie Flint (now retired) who exposed me to music outside of church music, including but not limited to Elvis Presley's "Love Me Tender." She went beyond the call of duty and I'm forever grateful! In college, my greatest influence was the late Dr. Marilyn Thompson who was a vocal pedagogue and responsible for my foundation in vocal technique and helped me start my journey as a countertenor.

I wanted to be a musician when I realized I could make money doing it. As a kid, I was paid $5 to sing Happy Birthday to all the parties, at my local hometown skating ring on weekends, and it was my first "gig." While my parents kept the money, I couldn't believe that was all I had to do; especially growing up having to do chores in order to get an allowance. I knew I had found my road to freedom.

When you think of a male soprano, in secular music, you might think of Prince, Phillip Bailey or Smokey Robinson—to name a few. I didn't know how to classify their voice types, as a kid, but I knew I was influenced by their sound and later realized I had access to the same vocal register but didn't know how to use it. It was not until I started studying classically where I gained a better understanding on the mechanics of the voice and was able to apply to other genres and develop a sound that worked for me.

One must understand the body and voice relationship to fully understand the voice and use it at its optimal level. This is a starting point to my approach to teaching. When a student realizes we are simply controlling air, which one might call breath management, to support your sound whether singing or speaking. The vocal folds are either compressed or decompressed and the articulation, amplification, resonation is controlled by the body (i.e. nasal cavity, oral cavity, tongue placement and soft palate is raised). Timbre, color, texture and range can be adjusted with proper technique, but these are natural elements of the voice for each individual singer.

I think what makes a dream band is when the musicians can be interconnected in a musical thought and/or idea—vibe on a piece of music or song, giving room for creativity and complementing each other in the moment. This can be achieved when we get past the barriers of fear, self and find the highest expression of togetherness.

Everyone knows the worst experience, on the road, is when you have to use the bathroom and trying to hold it until the next stop. Let's just say "if you have to go, you have to go" and that I did on a tour to {[jny: Nashville}}, TN from {[jny: Baltimore}}, MD and my bandmates didn't speak to me until soundcheck. Thank God for air freshener. Oh, wait.. that made it worst!

The New Orleans Jazz & Heritage Festival is one of my favorites. Got to perform for their 50th Year of Joy Celebration last year and had a blast. From the hospitality, food and people I look forward to sharing every year on the different stages.

Most recently, I did a recording with gospel icon Ricky Dillard and New G and lead an arrangement of "Let There Be Peace on Earth" on his new album Choirmaster (Motown Gospel 2020) and this has been one of my favorite recordings because of how it speaks to the current political climate, racial injustice and world pandemic. It's a familiar tune that's usually sung during the holiday season. But—the stanza that stands out to me is..."let it begin with me." We must be the change we'd like to see in this Call-to-Action for peace and equity.

I hope my sound lends itself as a healing aid to touch the souls and hearts of the people that listen. '

My first degree is in Speech Communication and I wanted to do PR work. I didn't study music, formally, until my later collegiate experience as a non-traditional student.

My first jazz album was Miles Davis: Kind of Blues (Columbia). I remember going to the local music store, with my dad, and picked it up because the cover/ vinyl looked cool. Had no idea who he was, but was bitten by the jazz bug every sense and in fell in love with the Harmon mute.

Jazz is one the least-consumed music genres in the U.S. today, but the richest in culture and self-expression from one's own musical journey.

Has to start with educating our youth on the history of the music and providing platforms to share this music with the world, not just for commercial profit but to enrich our communities to carry on the legacy.

I'm excited to join the voice faculty of Columbia College of Chicago, in the upcoming fall 2020 term. All tour dates have been canceled; until further notice due to COVID-19.

That I will forget the words!

I work in HigherEd and serve as an Adjunct Professor of Voice.

If I wasn't a musician, I would be a Principal in secondary education.

Ella Fitzgerald would be my top pick. I'd love to talk about her approach to scatting/bebop and vocal phrasing.

How did you get started in music?

Music was a part of my household, although no one else in my immediate family is a singer. We would listen to all the greats from Luther Vandross to Sarah Vaughan. But—the center of it all is church music. This is where I gain an ear for music, in singing lead and harmonizing in the choir as a boy soprano. Formal training started at the Bright Leaf Music Workshop of America (a summer program held at Duke University), in my teenage years. Fast-forward, I decided to study music at Morgan State University and my 1st international tour was performing Wynton Marsalis' work "All Rise" with a select group of singers, in my freshman year.