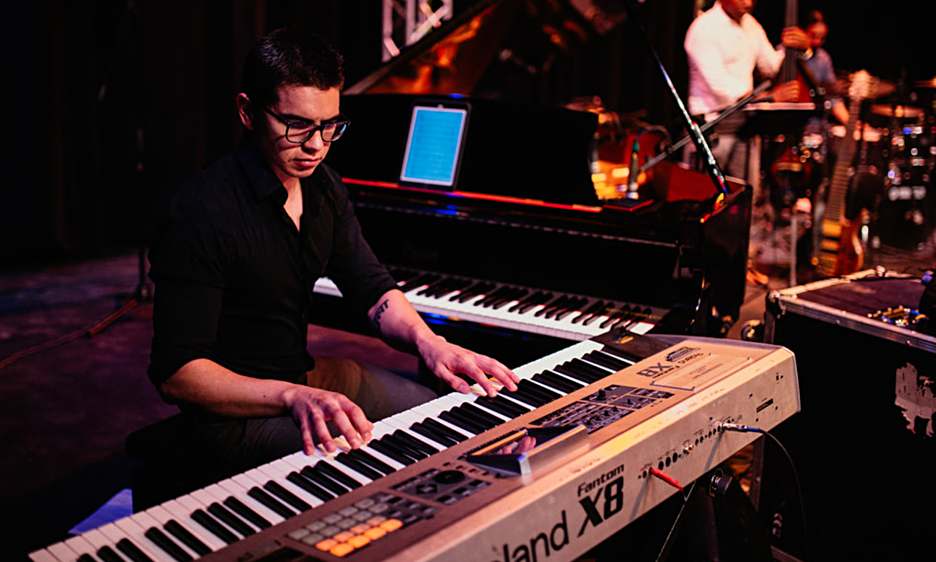 Carlos Barba is an active performer, composer, educator, arranger, improvisor, producer, and multi-instrumentalist residing in El Paso, TX. He has recorded seven full-length albums as leader, two as sideman (Juan Pedro Macias Trio & Gabriel Balderas Quartet), two E.P./minidiscs, and two singles. The Carlos Barba Trio had the opportunity of opening for Antonio Sanchez & Migration Band in the Cd. Juarez International Jazz Festival 2019. He also shared the stage with renowned musicians Brian Lynch, Obed Calvaire, Matt Penman, and Aaron Goldberg in the Guadalajara International Jazz Festival 2017. Carlos Barba is a versatile and sought-after collaborator who is frequently involved in a variety of projects in a wide range of genres. Music by Carlos Barba and The Carlos Barba Trio can be found on all music streaming platforms.

I have spent the most time practicing piano, keyboards/synthesizers, and organ, but I also play some guitar, accordion, and bass. I'd love to play more instruments, but learning and practicing different styles of music on the piano alone takes up most of my free time.

I studied classical piano with Steinway Artist Oscar Macchioni for three years in my undergraduate studies and then studied with Dr. Chris Reyman during my jazz performance master's degree at The University of Texas-at-El Paso. Before having a jazz piano teacher I was self-taught for many years and some of the pianists that have influenced me throughout my formative years are Erroll Garner, Bill Evans, Oscar Peterson, Brad Mehldau, Bill Charlap, Gerald Clayton, Ethan Iverson, Chucho Valdes, Ruben Gonzales, Alfredo Rodriguez, Danilo Pérez, etc. I also love listening to horn players and imitating their lines

I watched MTV videos as a kid. Music interested me at an early age and I played in several bands during high school, but It wasn't until college that I started taking music very seriously. When I started college I was unsure of what to major in, but deep down I knew I wanted to be a musician and composer. Once I made that decision, I was fully committed and gave it my best.

I feel I've finally found my voice and my sound in this new album that was released in May 2022. I feel like I've been imitating many pianists and musicians throughout my music career and I finally feel like this album stands out and doesn't really sound like an imitation of someone else. I love a variety of music genres, and my original compositions are a mixture of all of those influences. My approach to music has evolved into playing and listening to music that sounds beautiful and appealing in that particular moment. It could be simple and commercial like Coldplay, or complex and intellectual like Stravinsky.

Every student is different. I try to make connections and build relationships in order to have a more meaningful and rewarding experience on both ends. I also try to discover my students' learning styles and goals in order to better serve them. I try to use humor as much as possible because it makes the lessons fun and enjoyable.

My dream band would be a big band or an orchestra similar to the Metropole Orkest. I have always wanted to write and arrange for a large ensemble, but it is a daunting task to put together that many people, pay them for their time, and make them sound great. It sounds like a fun challenge and I know I'll get to it someday.

On one of my first recitals as a freshman in college, I froze up on stage and walked off before I could finish the piece. I had gone out the night before, had some drinks, and stayed up late. I felt really tired the next day and I was scheduled to perform a classical piano piece by Felix Mendelssohn. I got really nervous as I walked on-stage, I started the piece and about a minute in I blanked out and stopped. I felt frozen and could not figure out how to keep going. I had to stand up and walk off-stage. I felt so ashamed and embarrassed and I promised myself I would not let that happen ever again, and I have succeeded so far. I really learned a lot from that terrible experience.

I don't have a particular one, but theaters in general are really fun to play in. I have had some really great experiences because people are listening intently and are usually not distracted talking, on their phones, etc. Most theaters are usually equipped with grand pianos which definitely makes a difference. Some other venues might be real nice but may not have an acoustic piano, and that takes away from the experience if the music is meant to be played on an acoustic piano.

I'm really proud of my latest release The Enigmatic Mind (Carlos Baba Trio, 2022)I definitely put in a lot of effort, time, and money into this project. It also reflects my growth as a musician and composer compared to all of my earlier recordings.

I think I have developed a sound that sounds very different from the traditional piano trio sound in the jazz realm. There are influences of all the major subgenres like swing, bebop, funk, latin, etc. but it doesn't quite fit in with any of those. I admire trios such as The Bad Plus and Esbjorn Svensson Trio because they have a very unique sound and a very distinctive voice.

My lifelong musical companion and drummer in my trio Lawrence Brown is blind. I really underestimated blind people before I met him and I've learned so much from him and about their endless capabilities. Lawrence can do virtually anything I can and he adapts extremely well to his environment. I also love playing with him because he is extremely versatile and can play every genre out there.

Duke Ellington and John Coltrane (Impulse, 1963). I did not know much about them at the time but I completely loved "In a Sentimental Mood" when I first heard it.

It is incredible how much new jazz-influenced music is being released and performed every day worldwide. With music streaming and social media platforms anyone can access a never-ending stream of music at any time. It is amazing that we have reached this point in society but it also means more competition and makes it much harder to stand out.

I strongly believe we should be teaching jazz at the elementary and secondary levels as much as possible. Many people think jazz is strange because it is a foreign sound. I was never exposed to jazz at an early age so it took me a while to get into it. If more people are exposed to jazz at an early age there are a lot more chances they will enjoy it in the future. More funding and fine arts programs would definitely help create a strong foundation of musicians and audiences.

I am keeping busy promoting the new album, playing with a variety of groups, planning and arranging for a solo piano recording project, and working on a jazz method book that I will publish later this year.

Making horrible mistakes that could be noticed by everyone. These thoughts don't usually cross my mind, but when I have an important performance in a concert setting that is being recorded, the stakes are higher and some nerves definitely kick in.

I'd love to impact someone enough that they'll write a song for me and play it at my funeral. If not, maybe one of my own future compositions would be a nice way to remember me.

That changes on a weekly basis, depending on what's catchy at the time. This morning it was "Crazy" by Gnarls Barkley.

I teach guitar and piano at Parkland Middle School in El Paso Texas, and occasionally accompany choirs throughout the city.

J.S. Bach. He has done so much for music and the world in so many dimensions. I would love to learn about his thoughts and methods.

What do you enjoy most other than music?

Being a father and husband is the best thing that has happened to me. I always thought I would be a better musician if I stayed single with no kids, but having a great family and being part of a supporting team makes me a better person and enhances my musicianship overall.