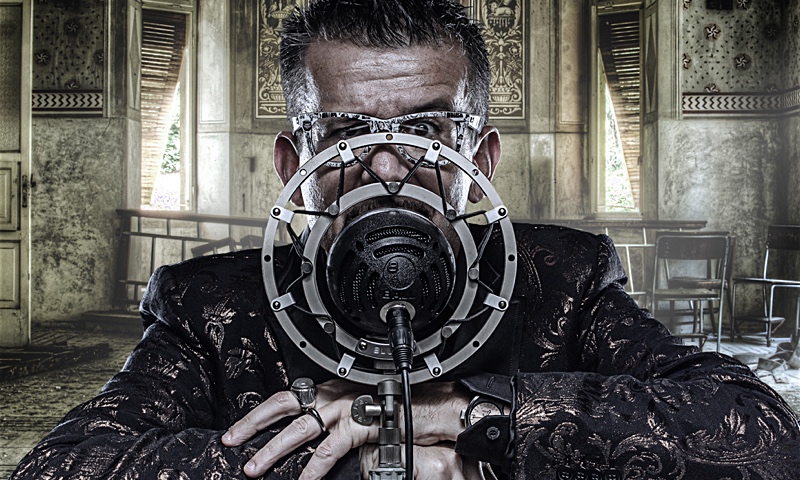 By boris savoldelli
May 5, 2016
Sign in to view read count
About Boris Savoldelli:
Boris is a vocal performer with a brilliant personality. He's always been in love with his "vocal instrument" and its extraordinary possibilities. He loves to find different original ways of singing, due to his eclectic background, from classical studies to jazz singing (thanks to his mentor Mark Murphy), passing from funk-rock to avant-garde experimental approaches. Boris Savoldelli has performed solo and in various projects all around the world, with over 250 performances in over 120 cities just in Russia, as well all around Italy and Ukraine. He has also performed multiple times in Mainland China, Hong Kong, Indonesia, South Korea, USA, Brazil, Spain. In October 2015, Boris received the Award at the Sergey Esenin International Literature Awards in Moscow for his project dedicated to Esenin poems in jazz.

"One of the most intriguing vocal projects to come along in years." —Arnaldo DeSouteiro, Jazz Station Records

"A vocal master contortionist... Multifaceted and immensely talented." —Glenn Astarita, All About Jazz

I knew I wanted to be a musician when...
When I listened at the age of seven to the the best of Jimi Hendrix. The song was "Voodoo Chile (Slight Return)." I was shocked by the way he played guitar, by his voice, his look. I always dreamt to be like him... but then I chose jazz music (much more because of improvisations... but hey, Jimi was also a jazz musician. Remember what Miles said about him!!)

Your sound and approach to music:
I try every day to be myself, to develop my own style and language. No matter what I'm singing (a jazz standard, a fusion one, a rock song or total improv), I always try to do my best and be as personal as I can. My approach to music is "omnivorous." I listen to any kind of music and let the music fit into my brain. Sooner or later all these different musics come out again. A crazy mix of styles. I cannot think of myself a second without music!

Your teaching approach:
Learn as much as you can. Learn everyday from everyone. Listen, listen, listen and listen again. Then forget everything... sooner or later all what you learned will come back again in the right way. And then, HAVE FUN and enjoy the magic of music.

Your dream band:
I love this question: Jimi Hendrix on guitar, John Bonham on drums, Charles Mingus and Jaco Pastorius on acoustic and electric bass, Miles Davis on trumpet... and me probably listening to them terrified by such a band. Ahahahaha.

Road story: Your best or worst experience:
Worst experience: Last tour in Russia. Perm, a beautiful town on Ural mountains. A very cute jazz club on my four visit to the town. Sold out, people kindly waiting for me and start clapping and screaming....and me throwing up in the toilet with a terrible virus killing me! After toilet, a coffee, a painkiller and on stage. Best experience.... Thanks to the beautiful audience on the same night I could sing well and the virus was killed! But the most exhilarating "adventure" was again in Russia. I went somewhere from town to town on a night train. It was something like 9pm. I went into my two bed cabin and, after 10 minutes, my "neighbour" recognized me (he was at one of my concerts a year before) and was so happy to call all of his family (his wife and three children) from another wagon asking them to bring food and vodka to have a party together!!

Favorite venue:
Lucky me, I have played at so many different venues around the world. The stage is my house, and I must admit I'm a pretty lucky guy when it comes to great venues.

Your favorite recording in your discography and why?
All of them are like children, and you love them all. Let's say Insanology because it is my very first album that jumped me into the magic musical world. But currently my brand new trio album with the great Raffaele Casarano on saxophones and Marco Bardoscia on double bass titled The Great Jazz Gig In The Sky, just released on the NYC label MoonJune Records. Our personal rendition of the Pink Floyd masterpiece The Dark Side Of The Moon.

What do you think is the most important thing you are contributing musically?
Whoah... this is a very "big" question. Let's say I try to do my best to show that a singer can be a serious musician and not only a showman. I try to use my voice like an instrument between instruments.

Did you know...
My secret dream is to be a great bassist, maybe like my friends Jimmy Haslip (electric bass) and Yaron Stavi (upright bass).

How would you describe the state of jazz today?
In very good state especially when it is mixed with different genres (like electronica, world music, rock and so on).

What are some of the essential requirements to keep jazz alive and growing?
Using and abusing of improvisation, experimentation and interplay with different musicians. Jazz music is an open minded music. You got to "live it" if you wanna play it!

What is in the near future?
A great new album with the trio I talked about above and a guest appearance on another MoonJune Records with the amazing Dwiki Dharmawan, Yaron Stavi, Asaf Sirkis, Mark Wingfield, Nicolas Meier and Gilad Atzmon. I sing a couple of tunes on the album and one of them is Robert Wyatt's amazing song "Forest." It was an incredible emotion and incomparable honor to be asked to record this amazing song! And I really hope the great Robert Wyatt won't mind the way I sing it. We will perform the project live in London at the end of May (2016). Then I will play some jazz festivals with the trio in Italy and will tour again in the fall.

What's your greatest fear when you perform?
Usually I have no fear. Singing live is a natural part of my life. I work really hard everyday to improve my voice and techniques and when I'm on stage i want to have fun and you know what? Sometimes the "shit" that can happen on stage it could simply be a new perspective to start from. During all these years in so many stages unexpected things are very interesting to "stimulate" creative solutions.

What song would you like played at your funeral?
Would love to sing by myself at my funeral... wouldn't it be cool?? Probably Leonard Cohen's "Bird On A Wire."

What is your favorite song to whistle or sing in the shower?
Ahahahaha.....of course some Frank Zappa crazy melodies.

By Day:
My day job is my music... writing, studying, rehearsing... and answering questions from journalists... so I sing and whistle practically for 24 hours... yes, I use to talk even when I'm sleeping!

If I weren't a jazz musician, I would be a:
A film director!! I love great movies.

If I could have dinner with anyone from history, who would it be?
Without a doubt: Cole Porter. There are something like a million questions I have to ask him about his music.