Although the last of the February snow onslaughts tried its best to kill the 38th annual Lakeland Jazz Festival—the longest-running jazz festival in Northeast Ohio—and did, indeed, postpone trumpeter Sean Jones' scheduled February 26 performance until a later date, drummer T. S. Monk and his sextet bravely battled the elements to make it into Kirtland, Ohio, and entertain a room admirably filled for such a blustery night. 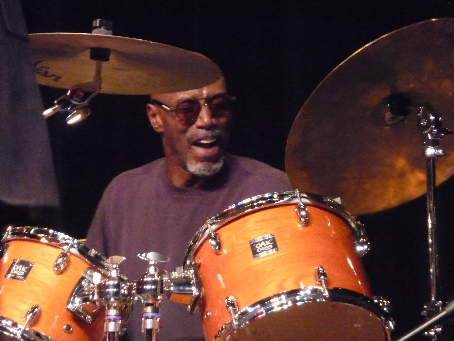 That night, Monk confessed that he hadn't played before with most of the musicians on the stage. But it didn't show. The group played a program of bebop and hard bop numbers, including pieces by Monk's esteemed father, Thelonious Monk (most notably a nice, horn-led rendition of "'Round Midnight" arranged by Max Roach and Clifford Jordan). Monk and his band never faltered in its fiery, if straight-ahead, presentation of tunes marked by serial soloing.

Trumpeter James Zollar supplied the brashness and blare, but, not unlike that brashest of cats, Freddie Hubbard, offset his extended screams with pointed, cutting statements. Tenor saxophonist Michael Karn and alto player Patience Higgins complemented each other nicely. Karn executed technically brilliant, but nonetheless warm solos; Higgins was more strongly rooted in a passionate blues feel. Bassist Daniel Loomis, whom Monk praised more than once for overcoming the greatest obstacles in arriving at the show, moved from a thick, fuzzy tone to a more pronounced voice by show's end. But his lines were quick, percussive and inventive throughout.

Pianist Helen Sung, however, was the standout. Her individual voice rose repeatedly throughout the evening. Whether while comping or soloing, she was constantly in search of (and regularly found) inspiring, witty, danceable shifts to a given melodic and harmonic structure. Monk cleared the stage for her on the third number, allowing Sung to run off a rollicking, ragtimish number that had her piano bouncing. Monk, himself, peeked out from behind the backstage curtain to take in the solo magic.

And while the drummer bust loose on the opening tune, striking forcefully into a heavy, thundering fit of percussive joy, and traded in spots with the horns or with bass and piano, Monk was primarily content as the captain of his ship. He guided the proceedings from behind his kit with an unostentatious, if happily and confidently rhythmic, hand. When exuberance overcame him, it was his voice that did the venting. He frequently sprung to the front of the stage, took up the mic and engaged the audience with his spirit and humor. He even stopped once mid-solo and came forward to verbally recognize Sung for her enlightening statement that had just preceded his. 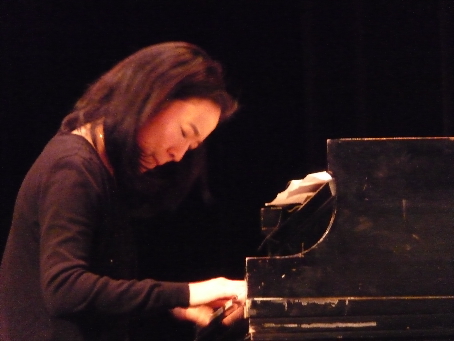 "This isn't rocket science," he'd opined earlier about the music. Nor did he feel it was as intellectual of an exercise as the pundits would have everyone believe. No, the making of jazz, and the emotion that springs from that creation, remains the stuff of mystery. And, though he left this unsaid, for Monk, music clearly also is the stuff of pure joy. Such wonder was there in his voice when he returned to his stool to count off the next tune, his smooth baritone calling out a rhythmic, sing-songy chant: "Quick-and-hec-tic!"