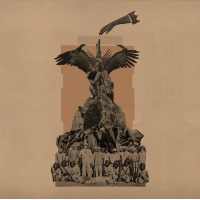 There is a word, "earworm" or sometimes the term "brainworm" is used to describe the phenomena of getting a song stuck in your head. One that repeats, and repeats and repeats itself. Usually, it is a saccharin pop song with a hook. Strange, then, to catch an earworm from the songs played by the Argentinian free jazz quartet Calato. Yes, really.

Swong is their second release, and it follows their eponymously titled 2012 disc on Jardinista! Recs. The ten tracks with just fifteen minutes of music are best described as the intersection of John Zorn's Naked City, Locus Solus and Archery. But where Zorn favored structure, Calato tends toward free improvisation.

Made up of two prepared guitars, from Javier Areal Vélez and Jorge Espinal, Pablo Verón's drums, and the vocals of Agustín Genoud, the quartet performs from a loose collection of graphic scores that act more as suggestions than limitations. Genoud's vocals draw from the beatbox of Napoleon Maddox and the guttural explosions of Mike Patton and Yamatsuka Eye.

From the interminable ten seconds of "Seis Flanes" to the twenty-five ticks that make up the opener "Verde," the quartet delivers generous portions. The latter piece opens with a beatbox vocal, then some Arto Lindsay/early-Bill Frisell inspired guitar skronk and stagger drums before a howling ending. So it goes, short sharp shots of sound. Well, except for the egregious title track that clocks in at 4:27. The quartet opts for a minimalist rumbling improvisation dream soundscape fed by feedback.

That earworm I mentioned: "Brass" is a funk-inspired vehicle chase minute of sound, whose wheels come off as both right and left channel guitars attempt to jump start the engine, before pushing the junker into the void.