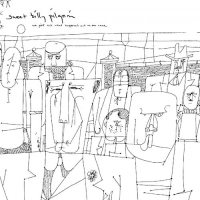 My how things have changed. Upon first encountering Britain's Sweet Billy Pilgrim at the 2007 Punkt Festival in Kristiansand, Norway, funding was so diminutive that singer/songwriter/guitarist/multi-instrumentalist/erstwhile leader Tim Elsenberg was unable to bring the full group; instead, he came with bassist/banjoist/background vocalist Anthony Bishop...and even had to use a borrowed Fender Stratocaster, which caused no shortage of tuning difficulties throughout the duo's still-impressive set.

Just shy of a decade later, the group has been nominated for a Mercury prize (for its 2009 sophomore effort, Twice Born Men), earned significant critical response which, in addition to All About Jazz, was found in important rock/pop periodicals including Uncut and, in particular, MOJO, which awarded Twice Born Men's follow-up, 2012's Crown and Treaty, a rare Five Star/Instant Classic rating.

The group has also gone from being a self-produced DIY band with its 2005 debut, We Just Did What Happened and No One Came (Wonderland)—a characteristically self-effacing title that pretty much nailed the group's early years (as is so often the case with any new group)—to having its records released by avant-songsmith David Sylvian's SamadhiSound label (Twice Born Men), the majors (EMI, for Crown and Treaty) and, now, Kscope Records (2015's Motorcade Amnesia), one of the preeminent labels for progressive and post- progressive music, with artists like Britain's Pineapple Thief and Anathema, Norway's Gazpacho, and its most successful artist to date, Steven Wilson, whose star has continued to rise on a rapid upwards trajectory since putting Porcupine Tree on hold and going solo.

And Elsenberg—in addition to becoming both a remixer and engineer/producer—has written songs for other groups as well as becoming a music educator at a local school. A long way from running LAN lines as a day gig, when we first met at Punkt in 2007.

Subsequent opportunities to catch SBP live were in its four-piece touring band glory; along with Elsenberg, Bishop and fellow founding member, drummer Alistair Hamer, SBP live included a revolving-door keyboardist/vocalist for a few years, until singer/guitarist/keyboardist Jana Carpenter joined the group as a full-time fourth member, making her first appearance on Crown and Treaty but afforded considerably more presence and freedom on Motorcade Amnesiacs . Appearances at Punkt 2009, again, in Kristiansand, and then, a few months later that same year, as part of a "road version" of Punkt, in a quadruple bill over two nights in Mannheim, Germany (which really meant eight shows: four performances and four live remixes), as part of the annual Enjoy Jazz Festival, were nothing short of exceptional—completely accessible but, at the same time, idiosyncratic and, more importantly, intelligent pop music that made clear it's possible to write music that draws on everyone from King Crimson's Robert Fripp and British singer/songwriter/guitar wizard Richard Thompson to musicians in-between and beyond these stylistically diverse artists' broad range to create something unmistakable, despite primary writer Elsenberg and the entire group's far-reaching musical proclivities.

Being with a major label may have had its pluses, but Kscope seems like the right home for Sweet Billy Pilgrim. No only did the label get behind Motorcade Amnesiacs—giving it both the regular and two-disc deluxe treatments—but they've also given SBP the opportunity to bring back into print the subject of today's Rediscovery: the group's long out-of-print, hard to find debut, We Just Did What Happened and No One Came, in an attractive new digipak format with a re-envisioned cover that still captures the original's curious nature; an eight-page booklet with lyrics and liners from Elsenberg that shed light on the group's genesis for those coming more recently to the band; and tastefully (but not drastically) remixed/remastered sonics. As Elsenberg writes:

"This album was originally recorded and mixed on the most basic of equipment, with lots of enthusiasm but little in the way of technical know-how. In the intervening years, we got a bit better at making records and so we have taken this opportunity to improve the original mixes (alongside Francis [Kimberley]' careful remastering) to bring out a little more of the detail, without interfering with the homespun, DIY spirit of the enterprise."

Mission accomplished. Played through both my Tetra 333 speaker stack on an OPPO BDP-105D player and into a Leema Tucana II integrated amplifier in my living room—as well as in my office, where an OPPO HA-2 Headphone Amp/DAC sits between my iMac and a set of 2.1 powered Paradigm MilleniaOne CT Multisystem reference speakers to create a sound that comes nowhere near to matching the Tetras but is still very, very good—the 2016 Kwscope edition of We Just Did What Happened and No One Came possesses a presence lacking on the original, along with a greater attention to the multitude of sonic details that Elsenberg brought to this set of nine songs, when he first recorded most of it in that backyard shed.

The music incorporates elements, beyond Fripp and Thompson, of Sufjan Stevens and Adem, with hints of metal, irregularly metered progressive rock and gentle folkloric passages, often driven by harmonium, acoustic guitar(s), banjo and/or dulcimer into something inimitable and instantly appealing. There are even deeply buried references to harmonically sophisticated groups like Steely Dan.

But just as importantly, one look at the lyrics reproduced in the CD booklet and it becomes clear that Elsenberg is a songsmith who pays the same attention to the selection and perfection of every word as a musician like Jan Garbarek does the purity of every note. How many writers, after all, are capable of line like:

"Sometimes I see a dead man with his dying left to do." ("Atlantis")

"So you look for the light in the darkest of places
Where the decks are all marked
And the smiles are like razors
And your faith weighs you down like a debt That nobody wants to collect." ("God in the Details")

"Them's the breaks, the daily aches
So vague and ill-defined
And hearts will stop like broken clocks
As promises unwind
And I feel like a souvenir
Too tacky to be cool
But in the water I am beautiful." ("In the Water I Am Beautiful")


Musically, We Just Did What Happened and No One Came may, along with Twice Born Men, be Sweet Billy Pilgrim at its most diverse, its most eclectic, its most curious and its most witty; catching the between-song patter at a SBP show is like being a fly on the wall of a pub where Elsenberg, Bishop, Hamer and Carpenter are hanging, and being privy to playful banter imbued with the kind of relaxed knowledge of each other that comes from having played with each other for so many years. Few rock bands use banjo as often as SBP, but invariably it's just one of many instruments used to create a cinematic tapestry of acoustic and electronic sounds. In the case of the balladic but biting "Deshonrado" it's a pure folk combination of banjo, acoustic guitar and piano...but with synth washes wrapping around the stringed instruments, it assumes a more modernistic complexion, as it does during the chorus, which is unexpectedly angular after the verses' more eminent lyricism.

Elsewhere, the similarly dark "No Jesus In Here" may be a simplistic, countrified tune that follows conventional song form and even sports a faux-pedal steel guitar solo, but few country singers would write, so caustically:

"Blessed is this hollow man
He talks a pretty game
But all of this currency won't buy him better days
One cross for carrying
A cross for sitting down
One for remembering that nothing stays the same."


Equally, few groups use background vocals like true choirs, as Elsenberg does on the opening "Atlantis," where his unmistakably broad vibrato characterizes a voice capable of great power and gossamer-like vulnerability, layered over acoustic guitar, piano and harmonium. It's an early indicator of the greater warmth and presence of this gently remixed/remastered edition. Background vocals that blend with an industrial-sounding rhythm that seems paradoxical to all the acoustic instruments and voices (but somehow fits perfectly) are yet another example of how Elsenberg and SBP marry seemingly disparate sounds into a weave that's all the stronger for its quirky sonics. Similarly, the following "Star Spill Out of Cups," beginning with just Elsenberg's voice and banjo, takes the perfect album-opener of "Atlantis" and, with astute sequencing, segues into a song which gradually introduces Hamer and, ultimately, an entire group that, with Elsenberg doing all the writing back in those days, delivers progressive hints in the snaking bass line that strangely underscores the wash of synths and banjo during the second chorus before a middle section that includes bowed dulcimer and a slowly building chorus of:


A final chorus leads to a near-ambient ending that adds chimes, Frippertronics/Soundscape-informed sonic washes...and voices buried in the weeds that gradually ascend into the heavens with the rest of the song.

Given that the majority of the album was recorded by Elsenberg in his shed, largely overshadowing the contributions from Bishop and Hamer that would become increasingly significant, both in performance and on subsequent albums—in particular on Motorcade Amnesiacs, the group's most sonically dense, muscular and direct recording to date—looking back on We Just Did What Happened and No One Came reveals an album that, despite being tremendously ambitious at the time, remains a somehow smaller, more intimate recording than any of the group's subsequent releases. That said, the unique idiosyncrasies that identify SBP within seconds of spinning any of its four recordings were there from the very beginning, making this tenderly upgraded reissue of We Just Did What Happened and No One Came a most welcome event for SBP fans who came to the group a bit late in the game.

With a remix/remaster that sacrifices none of the album's intimacy while, at the same time, sounding ever-so-slightly bigger and with a more expansive soundstage, SBP has delivered what could be considered the definitive version of We Just Did What Happened and No One Came. For those who already own the original release, this is not a major rework of the album—that would be unfaithful to its origins—but it is a more enjoyable listen, with greater clarity and warmth.

Sweet Billy Pilgrim may have ultimately evolved into something even more inevitable yet equally unpredictable, but as the liner notes to We Just Did What Happened and No One Came conclude, first quoting the first opening lines from the second verse of "Atlantis":

"Something grows unintended in a corner of my heart
And it feels like a beginning but I don't know where to start.

Here. Sleepless and impatient with wonder; dizzy with invention. Here's where it starts."


Truer words could not be written about this reissue well-worth Rediscovery...and a band that, for fans of intelligent post-progressive music with hints of folk, metal, electronica and plenty more, is well worth checking out.


Tracks: Atlantis; Stars Spill Out of Cups; God in the Details; In the Water I Am Beautiful; Deshonrado; No Jesus in Here; Experience; Black Flag; Atropina.