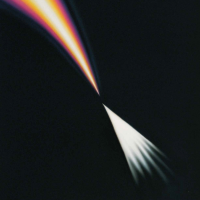 Multi-instrumentalists Rick Parker, of Brooklyn, and China's Li Daiguo are practitioners of psychoacoustic science in an experimental duo format. Understanding the interaction of wave dissemination, physical experience and endless scientific studies is hardly necessary; as listeners we still hear, in music, what we want to hear. On Free World Music, the pair offer a dizzying array of themes, often sounding more like an ensemble than a twosome.

Parker is the bona fide jazz presence here, a composer/trombonist first and foremost but also playing pocket piano (a small, sophisticated synthesizer) and bolsa bass, a similar synth for bass-type sounds. Parker has notably played with Tim Berne on Open Circuit (OutNow Recordings, 2013) and Wu-Tang Clan on Legendary Weapons (eOne Entertainment, 2011). A frequent traveler to Daiguo's China, he began working with his partner in 2014.

Daiguo, now a resident of Dali, China, was born and raised in Oklahoma. He has gained a reputation as a prominent personality in both China's experimental and traditional music scenes. With expertize on more than a dozen instruments—as well as the art of "throat-singing"—he has worked across settings from dance troupes to abstract noise groups. On Free World Music he plays the pipa (a four-stringed Chinese lute), cello, electronics and provides wordless vocals.

The album opens with one of the more effects heavy pieces, "All-Purpose Remedy For Indescribable Emotional Discomfort" but finds a more melodic center in the subsequent "Make Way For The Mane of Spit and Nails." With the mandolin-like sound of the pipa, synths and Parker's yawning trombone, "Posting Every 5 Minutes Can Teach You How To Be Yourself Without Acting" turns orchestral as it develops. Daiguo's vocalizations layer overlapping pitches above the other instruments, creating an otherworldly effect.

"Research Has Shown That Casting Spells Using Contemporary Social Media Is Just As Effective As Chanting Over Cauldrons" is an example of how the two artists blend influences as diverse as ethnic folk and hip-hop in a manner that that flows and maintains consistency. Free World Music falls outside any particular genre while being inclusive of many. Entertaining, different and expertly played, it is yet another new direction for creative music.

All-Purpose Remedy For Indescribable Emotional Discomfort; Make Way For The Mane of Spit and Nails; Posting Every 5 Minutes Can Teach You How To Be Yourself Without Acting; Research Has Shown That Casting Spells Using Contemporary Social Media Is Just As Effective As Chanting Over Cauldrons; Golden Age of Neuroscience = Next Phase of Human Mythology; The City’s Glory Was Defined Not Only By Every Citizen Wearing Silk Robes, Or By Their Seamless Melding of Modern Technology With The Human Body, But By The Compassion That Emanated From The Design of Their Matching Stilettos; A Steady Heartbeat Is The Sound of Death.