By Anthony Shaw
December 4, 2019
Sign in to view read count 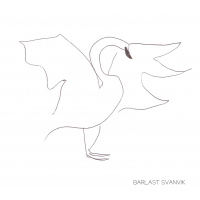 This second album from Barlast, a self-proclaimed folk-jazz quartet from Helsinki, continues much in the vein of their first, Ihantalo released in 2017. Where Ihantalo featured only tunes from bassist Philip Holm, the current album includes five tunes written by the whole band, as well as five more of Holm's, and is sonically more experimental.

To say that this music is minimalist is maybe to miss the point that it frequently leans on the interplay between the bass and percussionist Minna Koskenlahti. As Maureen 'Moe' Tucker underlined an originality to the Velvet Underground's compositional approach, Koskenlahti's softness is used to underpin the strongly acoustic character of the band's more adventurous pieces, like title track "Svanvik" ("Swan Bay") and the the lengthy "Som flugors surr i minä öron" ("Like Flies Buzzing in my Ear"). When Heikki Hänninen's guitar enters, it is restrained but in sharp contrast to the mellowness of the others' music.

When the folk side of the repertoire emerges, frequently written by Holm, Hänninen constrains his approach further. For a man who is more accustomed to playing Wayne Krantz compositions, and doing so very competently, his restraint is one of the underlying elements which makes this music exciting. The contrast to the other interesting acoustic elements, especially the raucous traditional birch-bark 'clarinet,' the mänkeri, is enervating.

While compositions tend to follow a rather linear pattern, developing intensity or a crescendo, the quality of the sound is a further important ingredient. The soggy sound of a lightly tapped, possibly shamanic, Finnish hand drum melts into the reedy bass-clarinet over which the eerie guitar flutters and dives on "Midnatt" ("Midnight"). The music may be spartan, reminiscent of countryman Pekka Lehti's workouts with various Finnish soloists on his 2000 disc Outo Voima (Strange Force) as well as the contemporary Oddarrang band, but it still sparkles.