By Mike Jacobs
December 4, 2019
Sign in to view read count 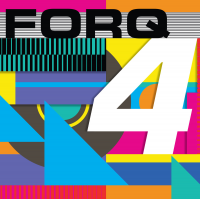 Forq has come a long way.

Since Keyboardist Henry Hey and (Snarky Puppy) bassist Michael League started the quartet with drummer Jason “JT” Thomas and guitarist Adam Rogers, Forq has gone through some crucial personnel changes. Rogers left after the first album and was replaced by Snarky Puppy guitarist Chris McQueen. Recording two more albums with that line up (Batch, GroundUp, 2015 and Threq, GroundUp, 2017), co- founder League left to give Kevin Scott the bass chair after a dearth of projects (and SP's ever demanding schedule) left him unable to give Forq the commitment he felt it deserved. Throughout it all, Forq has kept its eye on its original stylistic ball while capitalizing on the strengths of its different members.

Nowhere is this more evident or successful than on Four. Where the previous release, Threq, found the group coming into its own, this one plays like a true breakout album.

"Mr. Bort" leads off in typical Forq fashion—with self-deprecating quirkiness and accessibility that says "Bring the party hats"—but reveals hardly a clue about how the rest of the album is going to play out.

Save a single important one, the loss of Michael League, while lamentable, need only be lamented briefly. The glove-like fit Kevin Scott's taut, sinewy basslines find in the band's unique brand of music is apparent right out of the gate.

In Scott, it seems to have found (another) ideal pairing to the succinct, yet powerful battery of Jason JT Thomas—who once again shows he can play it straight as a skinny black tie, funk it up or lay out almost completely (when the song calls for it). Together they form a rhythmic platform as strong as any during League's tenure.

Unquestionably, the man responsible for the lion's share of Forq's immediate identifiability is Henry Hey. As on past albums, his ability to coax the sparkle out of what one might call unique, sometimes downright kitschy, choices for keyboard sounds always keeps the proceedings full of sonic surprise. From 1960's Farfisa cheese and mod-wheeled B-horror movie eeriness to lush pads and swirling waveforms, Hey—to paraphrase Frank Zappa—puts some major eyebrows on Forq's music.

Also stepping up to the plate on that score is guitarist McQueen, who matches Hey in drawing from a cupboard of unusually varied sounds. Sometimes parrying Hey with clean-toned opposites, sometimes challenging him in effected novelty, McQueen adds colorings that produce an even more wonderfully developed sonic character for Forq.

Definitely bolstering the unassuming nature of Forq's music, Hey and McQueen's application of these patinas, while occasionally running the risk of coming off as tongue-in-cheek to the cursory listener, transform what would already be fine tunes with great playing into engaging little pieces of aural theater. Indeed, it's hard to imagine compositions like "M-Theory" minus Hey and McQueen's co-induced sci-fi majesty, or "Whemled" without its contrasting submersive and straight textures throughout, but they would be something surely less effective.

Creative as they are, these sonic maneuvers by no means serve to take the place of serious playing. In fact, once acclimated, the light-hearted feel and quirky soundscapes actually help to highlight just how much underlying musical umami there is on Four.

Part of that lies in inventive, melody-centric compositions and the whip-smart arrangements applied to them. This makes for some real earworms such as McQueen's ever-exuberant "Rally" and the strutting "EAV." What perhaps sets this album even further ahead of its predecessors is that Forq has found what may be a magic point of equilibrium between economy and virtuosity. This makes the instances where they do "let the cat out of the bag"—among them Thomas' stunning breaks in "Grifter," McQueen's sheer solo- abandon in "EAV," Hey's piano assault in "Lullabye" and badder-than-thou turns in "Duck People"—all the more delicious, instead of de rigueur.

The final aspect integral to the success of the album is that despite a wide range of elements making appearances in the music—from Afrobeat, synth-pop, rock, funk and jazz—there's a solid, unified character to the material. As the main composers, Hey and McQueen display a writing synergy that shows in their collaborative tunes but that also seems to carry over to the band as a whole in how they complement, adorn and interact with the music presented by any writer. This translates to the listener as a much more palpable sense of Forq's identity, one that connects even the most disparate stylistic excursions.

Though somewhat counter-intuitive, it would be tempting to theorize that Michael League's departure, much like a sports team losing a star player, may have catalyzed the firing-on-all-cylinders effect evident on Four, pulling things together. It could also just as easily be chalked up to Scott's arrival. Chemistry is such a funny thing. You never know what mix of time, people or circumstance is going to allow a group to really run with the ball.

It suffices to say that Forq does exactly that on Four—producing its deepest, most satisfying album to date.