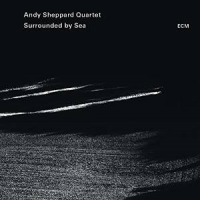 Saxophonist/composer Andy Sheppard has found a home in ECM. It's maybe not the perfect home for an artist as eclectic as Sheppard, for it's hard to see some of his other projects—notably the Scofield/Lovanoesque quartet Hotel Bristol—fitting in with the ECM aesthetic. Still, Sheppard's melodic improvisational approach and the airy lyricism on Movements in Color (ECM, 2009) and Trio Libero (ECM, 2012) fitted the ECM blueprint beautifully and rank among his most seductive recordings. With Surrounded by Sea Sheppard expands the sonic palette of Trio Libero with the addition of guitarist/electronics musician Eivind Aarset, whose ambient craft adds profundity—and simmering edge—to the prevailing undertstaed lyricism.

Folk music has colored most of Sheppards' recorded output over the years and here the quartet addresses "Aoidh, Na Dean Cadal Idir," a traditional Scottish song. The tune blossomed into a twenty-minute improvisation in the studio, was subsequently pruned and woven through the album in three parts, conferring a suite-like continuity on the whole. Hauntingly atmospheric and abundantly lyrical, Sheppard's yearning soprano is lent buoyancy by the loose grooves on the first and third parts. Part two is a fleeting vignette whose feathery lyricism dissipates and vanishes like the lightest of breezes briefly felt. More of this improvised/studio-sculpted mini-suite embedded throughout the album wouldn't have gone amiss.

Gentle eddies of bass and tenor saxophone color the poetic "Origin of the Species," with Aarset's orchestral waves subtly infusing the narrative; Rochford's presence is ghostly—sensed rather than heard. A similar aesthetic imbues "The Impossibility of Silence," with brushes more prominent. Fractured rhythms and echoing guitar plot the course on "They Aren't Perfect and Neither Am I," a brooding quartet tale where sketchy composed lines and measured improvisation dovetail easily. The low-rumbling intensity of the intro to "I See Your Eyes before Me" gives way to Sheppard's tenor lead, searching and ruminative in turn. The simple architecture of the dreamy waltz "A Letter" foregrounds Sheppard's beautiful weighted soprano lines.

Sheppard revisits older material on the hypnotic "Medication," previously interpreted with the Bergen Big Band; Aarset shadows Sheppard's defining melody closely before the saxophonist peels away over Rochford's light, yet propulsive groove. On "Looking for Ornette," Sheppard is drawn once more to explore the nuances of his Ornette Coleman-inspired piece that appeared on Dancing Man and Woman (Provocateur Records, 2000), closing this album in quietly celebratory mode.

Surrounded by Sea is an intimate statement whose chemistry belies the quartet's brief existence. There's a bold honesty in the music's refined contours and graceful adventure that invites and rewards the patient listener. There's the feeling too, that this quartet has plenty more to offer.