By Jakob Baekgaard
September 28, 2016
Sign in to view read count 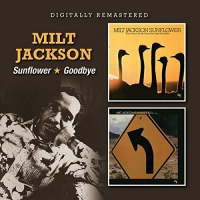 Even if vibes player Milt Jackson had just played with The Modern Jazz Quartet and not embarked on a solo career, his place in jazz history would be secure. However, Jackson was much more than a vital part of the famous chamber jazz group and he recorded a string of excellent albums, including three sessions as a leader for Creed Taylor's label, CTI.

Two of those albums are now conveniently gathered in a single-disc package from British reissue-label, BGO, and they are among the highlights of Jackson's solo career.

Sunflower (CTI, 1973) is both the best and most ambitious of the two. The core band of Jackson, bassist Ron Carter, trumpeter Freddie Hubbard, pianist Herbie Hancock and drummer Billy Cobham is augmented by strings and horns, with extra spice from Ralph MacDonald's delicate percussion. Then there is guitarist Jay Berliner. His flamenco flourishes on nylon string guitar in the beginning of the Jackson-penned "For Someone I Love" add extra atmosphere to a piece that is both tranquil and in movement.

Worth noticing throughout the album is the dynamic string arrangements from Don Sebesky, the house arranger for CTI. When preparing the arrangements for the pieces, Sebesky incorporated the changes suggested by the players and the result is a completely organic and unusually rhythmic use of strings that follows the flow of the music.

The album is both orchestral and funky, with "People Make the World Go Round" sporting an irresistible in-the-pocket groove from Carter and shimmering electric piano from Hancock. It all ends with the beautiful title track whose catchy melody is composed by Hubbard. His playing throughout the album is pure delight, bright and burnished, but also warm and airy. It is the perfect complement to the crystalline sounds from Jackson's vibraphone.

Goodbye is not in the same league, but is a genuinely good album with flutist Hubert Laws in a prominent role. Carter is once again on board and Cobham and Steve Gadd share the drum chair while Cedar Walton plays the piano. The combination of Walton's elegant electric piano and the ethereal sounds of Laws' flute and Jackson's vibraphone is a perfect match and creates a contemporary chamber jazz sound. However, this aesthetic is unfortunately spoilt a bit by two tracks that are somewhat out of character compared to the first three tracks. It's all right with the bop-infused closer, pianist Horace Silver's "Opus De Funk," where Laws is still playing, but the inclusion of the otherwise fine "SKJ" from the Sunflower session underlines the slight hodgepodge feel of the album. It is a shame because there is the potential of a more fully realized sound on Goodbye.

There is a probably a good reason why the relatively straight swinging "SKJ" was left out on the original Sunflower. It did not fit the careful aesthetic of that particular album. Sunflower ended up being a masterpiece while Goodbye more feels like an album of leftovers from a masterpiece.

All in all, this package has a lot of very fine music and the detailed notes from Charles Waring, which include excerpts from a brand new interview with Ron Carter, are excellent, as is this compilation as a whole.

For Someone I Love; What Are You Doing the Rest of Your Life; People Make the World Go Round; Sunflower; Detour Ahead; Goodbye; Old Devil Moon; SKJ; Opus De Funk.