BY JOHN SHARPE
September 28, 2016
Sign in to view read count 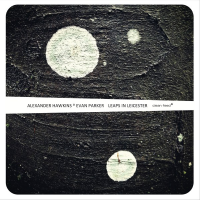 On tenor saxophone, his jazzier horn, Parker has developed his own distinctive language. He slides lightly into wiry yet burnished motifs, before appending bursts of astringent multiphonics or expanding rasping kernels into sinuous waves with undemonstrative circular breathing. Hawkins spans the modern jazz piano idiom, from Paul Bley to Cecil Taylor, adding a chiming romanticism to his angular runs and rippling glissandos. Together they create four long form improvisations, three around the 10-minute mark, the last breaching the half hour barrier.

Although captured live in the titular city, the pristine sound brings the interplay into stunning relief. The punning title (for non-British readers, Leicester is pronounced Lester) serves notice of the sly wit which informs the responsive dialogue, delivered in almost constant tandem. They phrase as one, resulting in not only the expected garrulous interchange, but also to suspenseful pauses in "Jump Start" and "Capriole." Both adjust tack at pace, picking up on each other's lines, so that Parker meets Hawkins astutely coiled flurries with chortling bluster.

Each track begins quietly, before gaining mass and velocity. Although he generally refrains from delving under the bonnet, on "Gambade" Hawkins strikes dampened notes, leading to a delicate exchange with Parker's keypad flutters. An unhurried coolly abstract reflectiveness pervades the set, especially on "The Shimmy (For Tony Marsh)," where Parker briefly touches on a lyrical figure at various points during the colloquy. After a measured first half, a stormy passage of thunderous chords and saxophonic lightning presages more intense inventive streams leavened by the only unaccompanied episodes of the set.

It all makes for yet another winning entry into an already illustrious series.