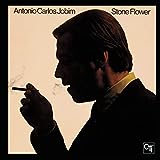 Jobim has been described as the Gershwin of Brazilian music, which is an apt title for a man who contributed so many original songs to the jazz repertoire, adding a few standards along the way. Those who were inspired to follow his work after “The Girl From Ipanema” may have picked up Wave, his most well-known solo record, but may have overlooked Stone Flower, a markedly better effort. The drippy strings on the former record brought out the quiet romanticism of the melodies, but makes the album sound dated today. Stone Flower marks a fresher approach, using musicians from the CTI stable, but don’t be misled by the personnel into thinking that Jobim has wandered into soul jazz. The quietly sensual melodies and beguiling bossa nova rhythms are as bewitching as ever, with Laws, Carter, and Green added sensual textures in the background. The title track says it all: Jobim on electric piano, heavily reverbed as if it was recorded underwater, with violin and trombone providing a warm tropical breeze overhead. No one could write bossa nova tunes as well as Jobim, and the songs on Stone Flower easily rank with his best work. Stone Flower is a fantastic record of quiet intensity.