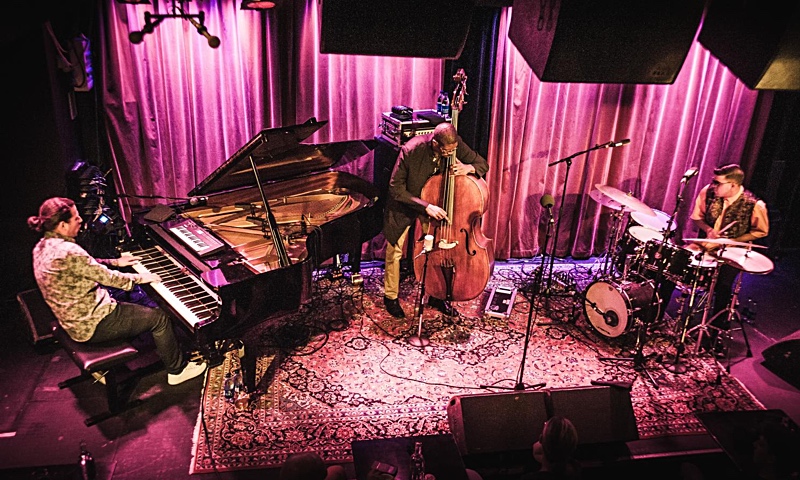 This year's autumnal Stockholm Jazz Festival continued their tilt toward world and improvisational music in the context of a jazz festival. That said, there was an ample supply of shows to go see and hear where "jazz" was preeminent. Programming world music artists -and by so doing, highlighting the incredible diversity that exists -the contrast to other major jazz festivals that've gone pure pop alongside jazz was clearly noticeable as the Stockholm Jazz Festival continued booking important artists doing special projects in varied settings across the city: from small, intimate clubs (e.g., Glenn Miller Café, Plugged Records) to grand halls (the classic Konserthuset), to one of the world's finest medium-sized jazz clubs (repeat winner in DownBeat's worldwide club poll), the now-legendary Fasching (turning 40 in 2017).

Once again running over two weekends and starting on that first Thursday, somehow the festival managed to keep interest high from start to finish. Maybe if this reviewer lived in Stockholm, he might get a better idea of how music lovers spend their evenings, with or without a festival to go to. My guess is, though, that the people who show up at these concerts and clubs, well-dressed or in jeans and a t-shirt, are familiar faces that come for the music and the musicians that make that music, festival or no festival. Truth be told, to this outsider, Stockholm remains a music hub, a base where people see and hear the music passionately, physically, emotionally, maybe even spiritually. And that's not even considering the folks who travel to town, both from within Sweden and from around the world, strictly for the music.

And, in this case, once again, it all revolved around a music we call jazz, a mongrel music.

Major jazz musicians were pairing up with some of those so-called "world musicians" if they weren't in fact making direct reference to such, e.g., American saxophonist Roscoe Mitchell with Japanese drummer Kikanju Baku. Israeli bassist Avishai Cohen and his trio delved in and out of a kind of mainstream mode of improvisational jazz with what might be considered more "ethnic" or folksy attributions. There were others that had me feeling like the barricades have all but disappeared when it comes to jazz and the rest of the world of music: Malian singer/guitarist Fatoumata Diawara with the Stockholm Jazz Orchestra, and Ethiopia's Hailu Mergia playing with Australians drummer Tony Buck and bassist Mick Majkowski. In both cases, it was like fire meeting ice, each artist's country of origin and what they have grown out from interfacing with another, similar spirit in dicey, fiery and refreshing counterpoints.

The bona fides in more conventional settings came from American drum legend Steve Gadd's quintet of merry-makers at the club Debaser Medis, this time with a curious fix on late-1970s Keith Jarrett's European Quartet ("The Windup" and "The Long Way Home"). With a definite, alternative vibe to that music, the modestly funky grooves came with help from Kevin Hays on keyboards and Jimmy Johnson's bass. Following a well-received opening set from singer Dee Dee Bridgewater, saxman/crooner/legend Archie Shepp and his group played it soulful and funky at the Konserhuset. Ellingtion's "Don't Get Around Much Anymore," his "Hambone" and "Mama Rose," Monk's "Ask Me Now," and the proverbial blues tune were all an evocation of the man's singular life as a traveling soothsayer, his croak of a tuneful voice a continual echo of his inimitable tenor (much more than his soprano) saxophone. At Fasching, saxophonist Tia Fuller and her trio were like a funky, swinging force of nature, her playing accomplished and uncompromising.

Other highlights: Sweden's own trumpeter Peter Asplund with Polish vocalist Vivian Buczek in a delicate yet lively jazz set of standards and originals at Plugged, celebrating the release of their new CD Songs Of Our Lives (Crown Jewels); another pairing, this time with Swedish reed player/composer Magnus Lindgren with Swedish opera singer Malena Ernman at Fasching. Also at Fasching: Cuban pianist Alfredo Rodriguez's blistering trio of Afro-Cuban jazz with longtime bandmates drummer Michael Olivera and bassist Reinier 'Negrón' Elizarde with the haunting Indian vocalist Ganavya Doraiswamy on certain songs, Columbian-Swedish singer Kristin Amparo's powerful and vivid storytelling, and the horn-driven, funky nine-piece Swedish collective Blacknuss Allstars delivering a late-night set that had the dance floor really moving. These and many others all helped to round out this diverse program of music that totaled 164 shows at 36 venues. All of it sharing an international, no-holds barred approach to big-tent jazz.

One show in particular that resonated beyond all the marvelous sounds and sights previously mentioned was Swedish singer Lina Nyberg's set at TeaterStudio Lederman, a intimate walkdown space that also serves as a venue for much live theater. Featuring Cecilia Persson on piano, Nyberg's show drew much material from her most recent album, the double-CD Aerials (Hoob Jazz). Aerials also features the Vinola String Quartet. On hand to perform with her at this show minus the quartet was one of their violinists, Lina Rydberg. In addition to Persson, other musicians who recorded with Nyberg and performed were guitarist David Stackenas, bassist Josef Kallerdahl and Peter Danemo on percussion and live electronics.

A curious mix of standards were the bill of fare, augmented with some original music. "Fly Me To The Moon," "Where Flamingos Fly," "A Nightingale Sang In Berkeley Square" ... all of these tunes known to so many for so long, all had the Nyberg personal stamp on them, the singer, in essence, having made them her own. There were vamps, sudden endings, a touch of rock with Stackenas' Fender, the arrangements always unconventional, unusually fresh. For example, instead of hearing "Fly Me To The Moon" as a swinger, a la Sinatra, Nyberg took the song down more than a few notches, a ballad reinvented, where the words became the center, as she slowly drew out the lyrics, repeatedly: "In other words, darling, kiss me." "A Nightingale Sang In Berkeley Square" had no tempo, with everyone playing as if in some independently assigned space but also somehow playing interactively.

Nyberg's singing voice is a unique combination of something slightly atonal yet still very lyrical, and almost conversational. Residing somewhere between singing and speaking, mostly in the middle register, her delivery was full of unexpected twists and turns. In fact, there was a fair amount of banter from her between songs, songs sung alternately in English and Swedish. Many of the songs were guitar-centered, Stackenas often using his pedals to, not surprisingly, help advance a sense of weightlessness to the music, a music most often centered around a floating pulse.

Also from Aerials, towards the end of their set was their interpretation of the standard "Bye, Bye Blackbird." Once again, this was a "standard" that was ever-so-gently dismantled, it's melody still recognizable but one that became like taffy in Nyberg-the-arranger's hands. Everyone was playing patterns around Nyberg, who became the center of the song, singing that oh-so-familiar melody, hanging on notes, scatting, always calm in a world of buoyant sounds, sounds perpetually musical, sounds surrounding a perpetually musical voice.