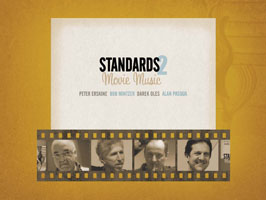 Sometimes, the most powerful statements are those delivered directly: gentle, yet forceful in their complete commitment, and without the trappings of excess.

With the sudden, unexpected passing in 2008 of Dave Carpenter—the talented and busy West Coast bassist who had played with everyone from Buddy Rich, Maynard Ferguson and Woody Herman to Scott Henderson, Allan Holdsworth and Lee Ritenour—drummer Peter Erskine and pianist Alan Pasqua had to find a new bassist for their longstanding trio, last heard on Standards (Fuzzy Music, 2008).

Fortunately, both had intersected before with Darek Oles. Oles, who emigrated from Poland to the United States in 1988 and has since worked with everyone from Charles Lloyd to Brad Mehldau and Pat Metheny, had also contributed to Pasqua's graceful My New Old Friend (Cryptogramophone, 2005), on which Erskine also performed. So, with the chemistry already intact, Erskine, Pasqua and Oles decided to expand to a quartet by adding Yellowjackets saxophonist Bob Mintzer for Standards 2, Movie Music, an album that revisits an array of scores ranging from themes to films like Rosemary's Baby and Cinema Paradiso, to songs from musicals like West Side Story and The Gay Divorcee. That every one of this recording's performers is a virtuoso, capable of technical wizardry and musical pyrotechnics, only makes Standards 2's avoidance of such trappings all the more impressive.

With elegant, respectful and reverent arrangements (shared amongst the quartet) that nevertheless provide room for understated interaction—often at a level so deep it's more felt than heard—every subtle nuance is made transparent and the soundscape three-dimensional, through the use of KMF Audio's Stereo Tube Microphone, a revolutionary and evolutionary recent design that also contributed to the pristine clarity of Standards. Once again recorded direct to two-track, Standards 2 expands on the strengths of Standards: a desire to get to the true heart and soul of the music; and, by checking all egos at the door, relying on a collective sound where, ironically, no individual shines...but, ultimately, everyone does. Complex, yet approachable arrangements like Dr. Kildare's familiar "Three Stars Will Shine Tonight" contrast with the ambling swing of West Side Story's enduring "Somewhere." A Latin-esque take on The Gay Divorcee's iconic "Night and Day" provides some of the disc's brightest moments, juxtaposed with the dark but surprisingly beautiful (given its subject matter) main theme to Rosemary's Baby.

Once again demonstrating the value of less over more—the equal significance of what isn't played as well as what is—this is music with an enduring appeal that spans over fifty years and has become so ingrained in the zeitgeist of the 20th Century as to still possess significance in the 21st. Standards 2, Movie Music is a warm and cozy program from a quartet of musical friends with nothing to prove, but plenty to gain from sharing this single day's recording with fans of mainstream jazz with an emphasis on refined lyricism and unfailing taste.