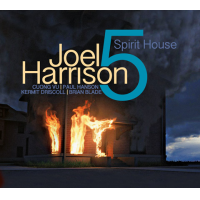 Throughout his storied career, Washington DC-born guitarist Joel Harrison has demonstrated an interest in a wide range of musical styles. Since his leadership debut in the mid-1990s, Harrison has explored an array of genres, from pan-global collaborations with North Indian classical musicians to radical rearrangements of Appalachian folk tunes. Spirit House, the premiere of his most recent ensemble, the Joel Harrison 5, features yet another unique configuration, with Harrison joined by trumpeter Cuong Vu, bassoonist Paul Hanson, bassist Kermit Driscoll and drummer Brian Blade.

A spirit house is a miniature structure used in East Asian societies as a shelter for deities, a home for invisible forces that guide the visible world, which appealed to Harrison as "the very definition of an empathetic music ensemble." The quintet's debut conveys this idea across a variety of tunes, unified by Harrison's strong but deceptively simple songwriting. Although the majority of the numbers are instrumental, two heartfelt ballads ("Some Thoughts on Kenny Kirkland" and "Look at Where You Are") showcase Harrison's rarely-heard singing voice delivering his own poetic lyrics.

In addition to jaunty post-bop excursions and proto-fusion workouts, the Americana influence of rootsy stylists like Bill Frisell and Danny Gatton can be heard in Harrison's approach towards cuts like Paul Motian's ballad "Johnny Broken Wing" and the bluesy funk of "You Must Go Through a Winter," although the leader's technique is singularly distinctive, ranging from the shimmering reverb and dreamy delay of the former number, to the biting distortion and crisp attack of the latter.

Though comprised primarily of challenging yet engaging modern jazz compositions, Spirit House finds Harrison briefly crossing over into sensitive sing-songwriter territory, buttressed by a phenomenal group of sympathetic musicians. As unique as this record is in his eclectic discography, nothing in Harrison's remarkable oeuvre could be considered conservative or conventional.

An Elephant in Igor's Yard; Old Friends; Left Hook; Johnny Broken Wing; Some Thoughts on Kenny Kirkland; You Must Go Through a Winter; Sacred Love; Spirit House; Look at Where You Are.