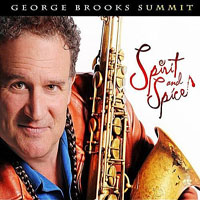 The road taken by saxophonist, George Brooks on Spirit and Spice may not be new, and is far from the glamorous one that guitarist John McLaughlin blazed through in the 1970s and '80s, with various incarnations of the Mahavishnu Orchestra. However, it remains a significant one if a musician playing in a Western idiom is willing to focus his or her creativity on pushing the boundaries beyond where they had been pushed before. It would have been a steep climb to get beyond the musical idioms fused memorably by McLaughlin, but Brooks is made of sterner stuff, it seems. Barring the familiar wail of the violin, punctuated by the complex polyrhythmic cycles of the tabla, on "Spice," somewhat reminiscent of the conversations that violinist Lakshminarayana Shankar and tabla maestro Zakir Hussain had in former times, Brooks is too sophisticated a musician to use what must surely be a tired pattern of music.

Brooks is on risky ground even with a saxophone, an instrument that has been used fairly regularly in Hindustani music—both classical and popular (as in Indian film soundtracks). However, Brooks' saxophone is hauntingly beautiful and stands out even when bassist Kai Eckhardt and guitarist Fareed Haque are waxing eloquent on such pieces as "Monsoon Blues" and "Spice." Even with his broad, bronzed tone, Brooks seemingly makes the saxophone weep and moan when he is dallying in a wistful mode. This all but obviates the necessity of the violin, which might otherwise play the principal character in creating the pathos that this music seems to create in rich melodies and down-swept harmonies. "Spirit" is a wonderful expedition in the realm of these and other finer emotions. Brooks' spirit seems to soar heavenward here, chased by Frank Martin's spritely piano. Brooks is absolutely magnificent on "Silent Prayer—Madhuvanti," as he lets his tenor horn float above all else, just as he does with soprano on "Casting." And the sultry mood of "Lalita" sweeps in gentle waves from the lips of vocalist Kala Ramnath, as it does from Brooks' reed, as he employs circular breathing to accentuate the mood.

In a fine tribute to an obvious mentor, Sonny Rollins, Brooks does a fine rearrangement of the master's "St. Thomas," and he is generously supported with block chords and swiftly changing linear licks by Haque, whose solo is darting and brilliant. Kai Eckhardt, another charter member of a later incarnation of Mahavishnu Orchestra, is quietly dazzling as he chases down melodies with fluid ingenuity. His quick break on "Sri Rollins," the track in question, is inspired. In the undulating melody of "Peshkar for Hamza," kindred spirits collide from across geographic divides: Hussain's masterful tabla, playing more than one of 108 rhythm cycles in the Indian rhythmic system, the crying sitar of Niladri Kumar nestle cheek by jowl with Haque's guitar, Steve Smith's tempered timpani and floating above it all, is Brooks' saxophone, which is wonderful throughout this ever so memorable album.