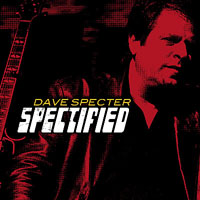 Guitarist Dave Specter knows his blues and he has a track record to prove it. This set is, however, more reflective of the extent of his musical knowledge and appreciation for different forms. It's also a rare example of an instrumental set which loses nothing with repeated listens—and its ability to put a smile on the face only seems to grow with each successive spin.

"Rumba & Tonic" provides ample evidence—and also how Specter's guitar and Los Lobos guest David Hidalgo's accordion form an unlikely union over its slinking rhythm. There may be a number of reasons why this works, but there can be no doubt that the leader's deft work is among the most significant.

"Soul Serenade" serves notice that Specter knows his Stax catalog, too. His once-again deft touch is that of a musician with an innate avoidance of histrionics, his work also enhanced by the quality of his band. The Boll Weavil Brass is a section drilled to the point of greasy, meaning that they're an antidote to anything mechanical. Indeed, it's the overriding warmth of this track that's so crucial in the forming of those smiles.

While a title like "Blues Call" is self-explanatory, it doesn't really sum everything up. There are shades of Wes Montgomery and even more pertinent Grant Green at the heart of Specter's work here, and the band comes into its own as it takes its feet off the accelerator, lays back, and simply flows. Organist Pete Benson can be mentioned in the same sentence as Big John Patton and Les McCann, without straining for effect.

There's a very different sounding Specter on "Slick Pick," which is trenchant enough to make its title seem like something thought up at the last minute, but it is the music that matters and, after Specter's outing, suggests that what the guitarist has delivered so far is a mere fraction of his capabilities. Benson's on-hand again, greasin' easy.

All of which only goes to show that it ain't just a matter of what you know, it's a matter of how you go about it. Specter makes the point in his own way by digging right on in on Ma Rainey's "See See Rider," where the guitarist and his band get simultaneously clean and dirty, recalling just how much the history matters.