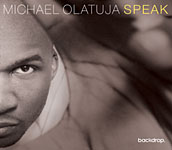 At its very best, pop music is supposed to be inclusive, and open to a wide variety of styles and genres; that's what makes it pop right? But what is heard on the Internet and the airwaves is at best formulaic, at worst uninspired and superficial. Along with that diagnosis there's the almost Apartheid-like exclusion of any jazz influences, making an already dire sonic situation worse.

Buoyed by Olatuja's jazz-fluent bottom, Speak sings and swings with a verve and vigor that is both global and local; secular, and spiritual. The lead-off track, "Ma Foya," is arguably the most Afro-centric cut with its peppery percussion, contrasted by the Jill Scott-ish mid-tempo bounce of "Little Sister," complete with Walker's Ella Fitzgerald-licious scat, and the haunting organ fills on the reverent "Altar Call." The mid-tempo, Quiet Storm-friendly "Unconditional" features a succinct and soulful bass solo, and the anthemic "Yi Yipada," sounds almost Brazilian in its rhythmic texture—not surprising, given the leader's Yoruban roots and the influence that ethnic group bequeathed to that South American country via the slave trade.

The title track, featuring rapper T.Y., snaps with the kind of urban, syncopated sizzle that will, no doubt, give birth to some zesty remixes. The 6/8, McCoy Tyner-timed take on the gospel standard "Walk with Me," and the Bill Evans-esque, waltzy ballad "Mama Ola"—the former, showcased by Alicia Olatuja's stirring contralto and the latter, laced with Rebello's poetic pianism and Toussaint's pity soprano lines—will disabuse those checking for Olatuja's jazz cred.

Speak is a propulsive, profound and pleasing record. But more importantly, it is a record that elegantly embraces all of the myriad musical moods and grooves that abound at the start of the twenty first century.