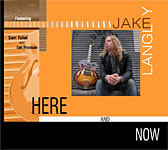 Like all musicians who inhabit a groove, Jake Langley may very likely get mired in the Hammond B3 and drums trio; that is, record after record could start to sound familiar. But Here and Now gives ample evidence that the guitarist has seized the day and broken free from the blues-laden, Wes Montgomery style that he came to inhabit for some time. And that is good news indeed, for several reasons.

First, the relative break from the past means that Langley sounds much more relaxed, less cultivated and more sinewy and decidedly more inventive. As for as the overall sound, a lesser keyboardist might try but organist Sam Yahel would not replicate Joey DeFrancesco dense bluesy B3 waves. Yahel is a sublime artist with a voice of his own that arises from a much lighter, self effacing touch. Furthermore, Yahel is more like a vocalist, phrasing with emotion. As a result he plays slower, often dancing on the curves of slurs and pirouetting in the silences between the notes.

This makes for a very interesting interplay between guitarist and B3 organist. And then there is drummer Ian Froman, who seems to have captured his role to break and caress the skins with telepathic grace. His ability to create showers of splashes on cymbals when called for and machine-gun rim shots when the music demands it, as well as rattle and hum on the toms and snares, is legion. It appears, then, that Langley has lucked in on a terrific cohort, where there is as much symbiosis in the interplay as there is fine content.

It is this factor that provides Langley the springboard to reinvent himself. Now the guitarist shows he has no favorite part of the fret board. He wails in the upper registers with the same facility as he moans, growls and chatters on the lower frets. His dynamics have always been admirable and now he adds a softer, more thoughtful touch to his playing, almost delaying the notes to will a certain sound from the strings.

There are many special moments on the record. "L-Train" features delicate fret work from Jake Langley, as well as shimmering bell like tones and textures from Froman, paying special attention to his ride cymbal. "Singularity" rejoices with some delightful yelping from Langley, as he pursues Yahel, who glides his way through the song's harmony with glorious diminished tones. "2012," far from being a futuristic exercise, finds Langley and Yahel in a friendly aerial duel—Langley playing in crisp single notes and Yahel with polytonal blocks that rattle and thump.

The surprises are the covers: Charles Mingus "Goodbye Pork Pie Hat" is an almost triumphant lament; Gordon Lightfoot's "If You Could Read My Mind" has thrilling twists and turns. This record marks a pivotal point in Jake Langley's career. It appears now that form his vantage point all the world's a stage for him at least.

Here and Now; L-Train; Singularity; 2012; Goodbye Pork Pie Hat; The Ropers; If You Could Read My Mind; Blues On The Corner; You Must Believe In Spring.