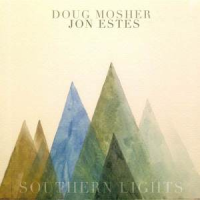 After listening to Southern Lights, a series of extremely low-key tone poems by tenor saxophonist Doug Mosher and bassist John Estes, two questions spontaneously arise: first, where is the audience for an album that glides gently along on an unflagging current of somnolence? (the term "smooth jazz" springs to mind, but even that genre produces an occasional spark). And second, what did Mosher and Estes have in mind when planning what is basically a procession of pleasantly unremarkable themes which, when added together, are at best no better than average?

Mosher, who plays tenor sax on every number, employs a soft, breathy sound reminiscent of the late Stan Getz but without Getz's peerless talent for improvisation. If, on the other hand, Mosher were an outstanding improviser no one would be the wiser, as there is almost none of that on Southern Lights. Instead, Mosher and Estes cling steadfastly to the melody on fifteen co-written compositions that encompass the album's forty-two minute playing time.

Lest one surmise after having read this far that Mosher and Estes are less than competent, that is not the case at all. They carry out their respective assignments quite well; it is the music —not the musicians —that is less than persuasive. There is a sameness of mood, tempo and emotion from one song to another that vitiates any attempt to sharpen the listener's focus and awareness. And while echoing the Getz sound is one thing, extemporizing on his rarefied level is quite another. Perhaps that is why no attempt to do so is made.

Not much can be said about the music itself save that it is by and large gentle and innocuous, ideal perhaps as a backdrop for one's day-to-day activities but unlikely to elicit any emotion aside from passive approval. Although tinged with the aura of jazz, it occupies a niche that is more akin to mood music as purveyed in days past by Mantovani, Percy Faith, Paul Weston and others who used a full orchestra to create a similar ambiance. Well-played but no more than that.