By David Adler
October 1, 1999
Sign in to view read count 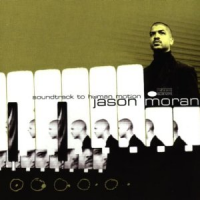 Can we all just agree that this is the debut of the year, if not the record of the year? Jazz has seen its share of excellent young players, but 24-year-old pianist Jason Moran really raises the bar with his superb Soundtrack to Human Motion. Moran explains the title as follows: "I like to think this recording could serve as the soundtrack to all movements a human might make in a given dayï." If only my daily movements were anywhere near as graceful and beautiful and fascinating as this album.

Moran has been recording as a sideman for a whopping two years. Many struggle a lifetime to attain his level of mastery. With his piano playing no less than his writing and arranging, Moran has already crafted a distinctive jazz voice, and it shines through on this CD from the first note to the last.

Innovative altoist Greg Osby, who gave Moran his start, served as his mentor, and produced this disc, appears as the sole horn. Joining Osby are Stefon Harris on vibes, Lonnie Plaxico on bass, and Eric Harland on drums. The entire ensemble is featured only on "Gangsterism on Canvas," "Still Moving," and "Aquanaut." Harris sits out for "Snake Stance," Osby for "Retrograde." Moran shifts to piano trio mode for "JAMO Meets SAMO," "Release From Suffering," and "States of Art," which begins with a solo rendition of Ravel's "Le Tombeau de Couperin." The album closes with "Root Progression," a stellar duet between Moran and a soprano-blowing Osby. Moran employs his players very wisely, varying the combinations so that the sound of the record is never static, always in motion.

Smack in the middle of the program, Moran plays a solo piece called "Kinesics." As I listened, an historical panorama of solo jazz piano came into view. Duke Ellington, Art Tatum, Bud Powell, Thelonious Monk; somehow Moran encompasses them all and utters a marvelous fin de siècle statement on jazz past and future, in a harmonic language all his own.

No doubt Moran's imagination will take him down many interesting roads. His influences are drawn from art, literature, and theater, as well as from classical music all the way to hip-hop. This is a critical broad-mindedness, though, not an everything-and-the-kitchen-sink approach to the creative enterprise. Moran simply knows talent for what it is, wherever it comes from. So when he mentions a desire to work with pop singer Björk and hip-hop's MC Saafir, one gets the feeling he's not talking about some ordinary crossover project. Watch this man closely and see what develops.