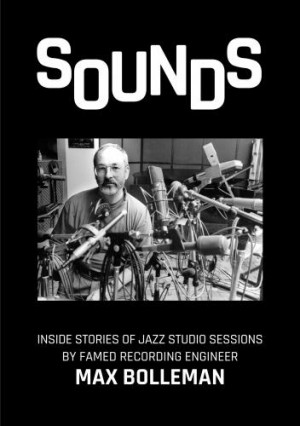 When it comes to recorded jazz, most diehard fans have definitive tastes in how they want their music to sound and be reproduced at home and on the go. It is not unusual to find zealots outlining the relative merits of recording engineers such as Rudy Van Gelder or Roy DuNann. Of more recent vintage, astute listeners will know the names of Jim Anderson or Joe Ferla. Because jazz is often performed on real, acoustic instruments, the attention to the details of the recording process really do make a difference. As such, the recording engineer might be an even more valuable team member than the producer of the session.

Back in 1982, jazz drummer Max Bolleman embarked on a new career, determined to open his own recording studio in his native Holland. The rest, as they say, is history -in this case, history sprinkled with an abundance of interesting anecdotes and experiences along the way. These moments form the basis for Bolleman's new book, which is brimming with fascinating stories delivered in a casual manner that reveals the character of the storyteller and his subjects.

In a confluence of coincidences, Bolleman tells how he shares some commonalities with a few key individuals from his past. Criss Cross Jazz founder Gerry Teekens also spent time as a jazz drummer before turning to teaching and then forming his own label. It would be Teekens who hired Bolleman to record Warne Marsh for Criss Cross back in 1982, thus ushering in the start of Studio 44. Akin to Rudy Van Gelder, Max was also an optometrist who for a time worked both at his practice and as an engineer on the side.

Early on in his career, Bolleman spins the tale of a trip to New York to record the Timeless All Stars at Van Gelder's. What he thought would be a memorable meeting, turned out to be a frustrating afternoon dealing with Rudy's abysmal behavior that day. It would be one of many instances when Bolleman's patience and grace seemed to shine through despite the obstacles he details in story after story.

The range of interesting anecdotes associated with the sessions recalled cover the gamut from the mildly irritating to the downright disturbing. Imagine what happened when Freddie Hubbard and Jerry Gonzalez almost resorted to fisticuffs because Jerry dared to play a little trumpet during one of Freddie's session. Or imagine the peculiar sounds coming through the monitors when it's determined that a pianist seems to be getting a hand job from his girlfriend sitting under the piano during a session. An overflowing toilet and careless musicians would deliver their own set of studio disturbances and a need for clean-up duties.

More seriously, Bolleman fondly talks of the many idols he ended up recording over the years such as Elvin Jones, Art Blakey, McCoy Tyner, and Philly Joe Jones. He also candidly notes instances of prejudice, many of them which threatened to put a serious damper on the recorded results. Regardless of the situation, Bolleman seemed to take the high road and his successes in recording under some rather hostile conditions speak to his keen expertise and integrity.

Many of the sessions Bolleman talks about at length come from the Criss Cross cannon, so fans of that label will find this text a great companion to that musical catalog. This reviewer has always been intrigued by a Dr. Lonnie Smith session that went unreleased for years. When the disc did come out, the explanation seemed cursory at best. Here, Bolleman really brings to light what actually happened that day which caused Teekens to shelve the date for so long.

Bolleman details his work for Criss Cross at several New York studios, along with the particulars of his own studios in Holland. He does not go into great technical detail, but does reveal some of the many lessons he learned "on the job." With wit and candor, Max adds considerably to the legacy of a field where so much of what happens remains lost behind closed doors. His story is a vital one that any jazz fan will find a delightful and engaging read.