BY DAN MCCLENAGHAN
April 11, 2019
Sign in to view read count 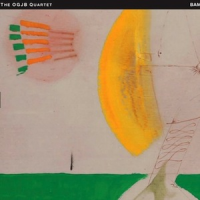 Finland's TUM Records started out the year 2019 with two compelling releases, Around Again, an innovative piano trio set from Finish pianist Iro Haarla exploring the compositions of Carla Bley, with bassist Ulf Krokfors and drummer Barry Altschul; and trumpeter Wadada Leo Smith's terrific Rosa Parks: Pure Love. They follow up this opening salvo with the disc at hand, Bamako by The OGJB Quartet.

An avant-garde all-star outing featuring the democratic collective of saxophonist Oliver Lake, cornetist Graham Haynes, bassist Joe Fonda and drummer Barry Altschul—the first letters of the first names giving the group its name—Bamako presents a free-end-of-the spectrum sound that breaks new ground while maintaining its grip on a late-fifties/mid-sixties foundation of flexibility. Like alto saxophonist Ornette Coleman's early recordings the music holds sway without a chording instrument, with a sax joined by a cornet to replace the sound of Don Cherry's pocket trumpet. And like pianist Cecil Taylor's mid-sized ensemble mid-sixties outings, those horns enjoy maximum freedom. In fact, a good place from which to approach Bamako is coming off a listening session of Coleman's Shape of Jazz to Come (Atlantic Records, 1959), followed up by Taylor's Unit Structures (Blue Note, 1966), to reset the radar back to a free-jazz receptivity.

The album opens with "Listen to Cornell West," a tumultuous Joe Fonda composition featuring a seismic rhythm behind horns that flow initially in unison before breaking into a searing squabble. The title tune, from Haynes' pen, features the horn man on the dousn'gouni, a West African instrument that, in conjunction with Altschul's contribution on the mbira, and Oliver Lake recitation of his poem, "Broken In Parts," makes the tune the most otherworldly and hypnotically beautiful segment of the recording. Bassist Barry Altschul's "Be Out S'Cool" has the horns ruminating over rhythmic jumble; and Oliver Lake's "Stick'' stutters ahead in a freewheeling a fire and brimstone mode.

Bamako closes with a pair of inspired collective improvisations, "OGJB #2" and "OGJB #1," the former a patiently-delivered introspective sound-poem; the latter sounding like a soundtrack to a psychedelic dream, wrapping up an innovative free-jazz outing.