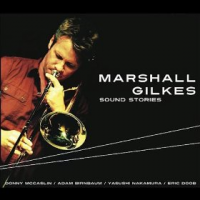 One thing evident from the outset of Marshall Gilkes' Sound Stories: this is a band that impresses with the sheer force of its Herculean chops and unbridled, ceaseless energy. Juilliard-educated and currently residing in Cologne, Germany, Gilkes is one of the most impressive young jazz trombonists to emerge in the last few years. Given the crop of amazing young trombonists on the scene these days—Joe Fiedler, Robert Bachner, Samuel Blaser—that's really saying something. Gilkes' solos combine uncanny pinpoint control with ideas that exude sweat and soul.

On Sound Stories, his third release, Gilkes wields some very heavy composing chops as well. The eight original pieces on Sound Stories are quite appealing, and firmly in the modern mainstream with the occasional odd turn. Several combine aggressive post-bop lines with classically inflected, almost Aaron Copland-esque melodies that occasionally have a gospel-like grandeur. Gilkes and his band leaven acrobatic modern jazz with some sweetly balladic moments. "Bare" is an warmly emotional ballad that lives up to its title, if it's meant in the verbal sense. Pianist Adam Birnbaum plays a central role on the mellow "Presence—Part 2," where his ruminative, Keith Jarrett-influenced piano gets a well-deserved spotlight. By contrast, "Presence—Part 1" whips through a thrill ride of changes, both harmonic and rhythmic, with Gilkes and drummer Eric Doob leading the way.

It also doesn't hurt that tenor saxophonist Donny McCaslin is along for this particular ride. Universally recognized as one of the finest tenor soloists around today, he goes toe-to-toe with Gilkes on pretty much every tune. This is a real treat. Not only that, but McCaslin and Gilkes sound great together in the frontline—not quite as gritty as The Crusaders' Wayne Henderson and Wilton Felder, but definitely with that same deeply soulful sound. Sound Stories is strong evidence that modern mainstream jazz is more vital, alive, and well as ever.