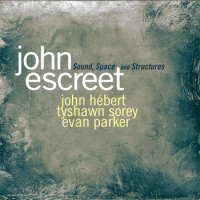 Nascent pianist, composer John Escreet has created a buzz in progressive jazz spheres, while paving a golden path since his well-received debut album, Consequences (Posi-Tone, 2008). The young British Renaissance man teams with fellow countryman and iconic saxophone improviser Evan Parker and frequent collaborators, bassist John Hebert and drummer Tyshawn Sorey on an album that is conspicuously modeled after its title.

Escreet and associates united with Parker for a few sets at John Zorn's New York City venue The Stone, and then ventured into the studio to record this album. Indeed, the musicians embed sound, space and structures as a triad for improvisational segments built with supple hues, partly concealed melodies, swirling cadenzas and an implied sense of urgency in spots.

Escreet and Parker operate in near flawless accord. They jab, spar and colorize the big picture via nimble contrasts and disparate tonal shadings and when Parker unleashes his famous circular breathing techniques, they execute swirling and bending choruses. Firmly entrenched in the free-zone, the soloists ride atop the rhythm section's bulging pulses, but the group also sports a tender side amid dainty excursions into minimalism. Regardless of the pace, the artists keep you on your toes as they enact swift countermoves and a few mesmerizing opuses while also injecting a good deal of warmth into various regions of sound.

On "Part V," Escreet opens with a solemn intro and engages Parker for a series of inquisitive statements and amplify the intensity with trance-like phrasings. However, "Part VII" is engineered with a complex and irregular ostinato motif, where Sorey smacks, pops and crackles the kit, paralleling Hebert's hefty bass lines. It's a multidimensional workout as they fade into the sunset, reenergize, and go for the knockout blow towards the finale.