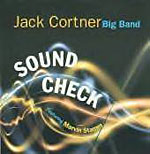 Back in 2007, veteran composer/arranger Jack Cortner (a longtime ghost for the late arranger and orchestrator Billy Byers) released Fast Track, his illustrious debut as a bandleader for the Jazzed Media label, with ex-Stan Kenton and Woody Herman trumpeter Marvin Stamm and his erstwhile sidekick, pianist Bill Mays, as the principal soloists. With Sound Check, Cortner, Stamm, and Mays return triumphantly with virtually the same ensemble drawn from the cream of New York session and Broadway pit musicians.

Sound Check vividly demonstrates that state-of-the-art, swinging big band jazz still has much to offer in the almost second decade of the 21st century.

Strike Up the Band; Speak Low; Sometime Ago; Cantaloupe Island; Sound Check; Yesterdays; Caravan; Cinema Paradiso Love Theme; A la Mode; You and the Night and the Music; It's All Right with Me.