Susanna and the Magical Orchestra: 3

By John Kelman
September 3, 2009
Sign in to view read count 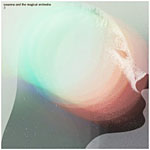 The ability of musicians on the Norwegian scene to live in a multitude of musical spaces was made clear at Molde Jazz 2009, where trumpeter Arve Henriksen performed in a variety of settings, ranging from the sublime beauty of his Cartography group to more aggressive noise improv with Supersilent. The two members of Susanna and the Magical Orchestra are equally spread out, in particular keyboardist Morten Qvenild, who has worked with groups ranging from indie instrumentalists Jaga Jazzist to more aggro progsters Shining, and whose In the Country trio has released its most ambitious album to date, Whiteout (Rune Grammofon, 2009). Vocalist Susanna Wallumrød has released two intimate singer/songwriter albums on Rune Grammofon—2007's Sonata Mix Dwarf Cosmos and 2009's Flowers of Evil.

3 represents a logical evolution for this retro-centric but still modernist-edged duo, with a shift from the brighter, covers-only Melody Mountain (Rune Grammofon, 2006) to emphasis on original writing that covers plenty of subject matter, all couched in a darker, more electronic ambience. There's a pulse on tunes like Wallumrød's opening "Recall," a poignant song of lost love; but it's soft, almost subliminal. The thundering drums samples of the more spiritual "Guiding Star" are more visceral, but they're still synched with synth washes and are more programmatic in nature.

Wallumrød and Qvenild split the writing duties, with the keyboardist's music largely more sophisticated harmonically and more direct lyrically. The synth-driven "Game" examines loss from a different perspective, while the more defined electronic groove of "Palpatine's Dream," with Wallumrød's layered voices, is one of 3's brightest, poppiest tracks despite its bleaker subject matter. Like Wallumrød, Qvenild creates miniature orchestral arrangements with layers of keyboards and quirky, orbiting synth lines.

With occasional assistance from friends including Supersilent's Helge Sten and Jaga Jazzist's Andreas Mjås, the duo also covers two diametrically distanced covers, both bearing little resemblance to the originals, yet still curiously recognizable. With Neil Peart's metronomic drumming and Geddy Lee's nails-on-a-chalkboard voice removed—replaced by gentler sonics and Wallumrød's warmer, more inviting voice—Rush's "Subdivisions" may not possess the prog-power of the original, but Susanna and the Magical Orchestra turn it into something far more inherently appealing. It's harder to criticize the source for Roy Harper's melancholy "Another Day," but with treated piano and Wallumrød's clear, unaffected voice, Wallumrød and Qvenild claim it as their own.

It's a testament to their own writing that the covers are barely discernable as coming from other sources. Relying on Wallumrød's pure, direct approach to singing and Qvenild's glorious attention to texture, 3 is another highlight in the careers of both Susanna and the Magical Orchestra the collective, and its two members individually. Stark, beautiful, tender and heartfelt, it's a singer/songwriter's album for the 21st century.

About Susanna and The Magical Orchestra