By J Hunter
September 3, 2009
Sign in to view read count
In an economic climate where jazz quartets are reviving the time-honored "Everybody in one Winnebago" tour strategy, it's amazing that big bands even exist, let alone put out the dynamic, challenging music that's come from Maria Schneider, the Vanguard Jazz Orchestra and the assorted large units associated with maintaining bassist Charles Mingus' legacy. What's more, the aforementioned groups aren't acting alone, as these three discs demonstrate.

Put simply, trombonist/arranger Bob Brookmeyer does not write liner notes for wannabes or losers. So when the 77-year old jazz icon claims former student Dave Rivello is "someone I believe belongs in the next generation of large jazz ensemble composers," it's a safe bet Brookmeyer isn't indulging in hyperbole. And if the legendary Brookmeyer's word isn't good enough, then one listen of Facing the Mirror should do the trick.

An educator himself, Rivello's Rochester, New York-based outfit makes plenty of glorious noise, both individually and collectively. But the big star here is Rivello's pen, because the composer's ability to shape marvelously evocative long-form compositions is in the same league (if not the same ballpark) as Maria Schneider—someone else Brookmeyer wrote liner notes for. Mike Kaupa's forlorn trumpet solo on "Sometime" comes wrapped in chord progressions guaranteed to draw tears from the emotionally vulnerable. The sizzling "Stealing Space" picks up pieces from the expansive opener "One by One by One" and runs with them—hard—while the reverent "Chorale" is the kind of affirming epilogue large-canvas efforts like Facing need to attain proper closure.

This music was recorded in 2002, so whether Rivello belongs in the same class as Schneider depends on whether he can achieve a follow-up that's as satisfying as his debut. Even so, Facing the Mirror is an excellent achievement that's deserved an audience long before this moment.

Visit Dave Rivello on the web.

Keyboardist James Carney's latest release is rooted in cinema, and Ways & Means has its predecessor Green-Wood (Songlines Recordings, 2007) to thank for it. Two pieces from Green-Wood were created to accompany a forgotten Hollywood silent movie. Thanks to a grant from Chamber Music America, Carney was able to take the next step, developing a 70-minute "dramatic narrative." And the rest is a twisted neo-noir soundtrack in search of a film.

Carney's color palate is vivid and stark, with an underlying surrealism that can't help but attract attention. "Nefarious Notions" is the equivalent of the opening credits, introducing a stellar cast featuring trumpeter Ralph Alessi, trombonist Josh Roseman, and reedmen Peter Epstein and Tony Malaby. (True, it's "only" a septet, but they pack the power of many big bands on the scene today.) The characters the musicians represent may be up to no good, but the players are on the side of the angels, helping Carney create an environment that's wide open to any functioning imagination. "Onondaga" offers a foreboding, fog-shrouded forest that could hide a killer behind any one of a thousand trees. Carney's analog synth on "Legal Action" transports the True Crime narrative to a futuristic urban dystopia; meanwhile, "Squatters" surveys the mean side of the streets some people are forced to live on.

Using Ways & Means as background music for everday tasks defeats its purpose. To enjoy (or, at least, fully experience) Carney's compositions requires dedicated listening to complete the equation. After all, there are a million stories in "the naked city," and with a little imagination, Ways & Means can help write some of them.

Visit James Carney on the web. 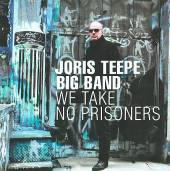 The Netherlands is known for tulips, windmills, cheese and artists ranging in style from Vincent van Gogh to M.C. Escher. What it's not known for—at least, not widely—is a love of hard-charging jazz. But a couple of jazz-related orchestral gigs in his native land inspired expatriate bassist Joris Teepe to build his own big band. And when the title says We Take No Prisoners, it's not kidding, and the six tracks on the disc emphatically prove that.

The aggression that shoots out of the speakers on the volatile opener "Flight 643" is reminiscent of Charles Mingus' more focused large-scale efforts. Mingus always had a love/hate relationship with mentor Duke Ellington, which is why Mingus' big-canvas efforts had equal measure of reverence and rebellion. Teepe has kept the rebellion but minimized the reverence, building colorful charts that reference the Ellington era while steering straight down the groundbreaking fast lane of present-day jazz armies like the Vanguard Jazz Orchestra. Even on relatively pastoral pieces like "Peace on Earth" and "Almost Lucky," Teepe never veers, never hesitates.

Prisoners doesn't have as many heavy hitters in its lineup as the VJO's last effort, the Grammy-winning Monday Night Live at the Village Vanguard (PlanetArts, 2008): reedman Don Braden is the biggest name in Teepe's cadre, and Braden only appears on two tracks. But while the VJO stays true to the basically-trad vision of founder John Lewis, guitarist Bruce Arnold adds rock and fusion spices to Teepe's savory gumbo, making the Joris Teepe Big Band a large unit of the 21st century. Not only do it take no prisoners, it makes no compromises—something Mingus would have approved of.

Visit Joris Teepe on the web.

Tracks: One by One by One; (of) Time and Time Past; Stealing Space; Dancing in Circles; Sometime; Beyond the Fall; The Path of Innocence; Chorale.

Tracks: Flight 643; We Take No Prisoners; Peace on Earth; Almost Lucky; It is Peculiar; The Princess and The Monster.