Soul on Soul: The Life and Music of Mary Lou Williams 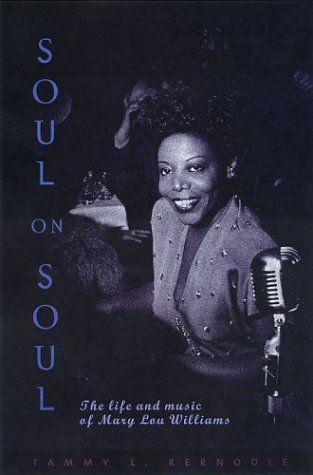 Five years ago Linda Dahl gave us Morning Glory, the first book-length biography of pianist/composer/arranger Mary Lou Williams. Now Tammy Kernodle, Associate Professor of Music at Miami University (Ohio) has covered much the same ground in Soul on Soul. This more concise version of Williams' story places her life more in the context of African-American history and sociology. Given her own background in musicology, Kernodle provides more analysis of Mary Lou Williams' compositions, particularly her sacred works. She pays far less attention to the romantic and sexual aspects of Williams' life than did Linda Dahl.

Embarking upon a professional music career in her teens, Mary Lou Williams achieved national fame in Andy Kirk's band, from 1931-42. More than any other factor, her arrangements gave that band its unique sound. Benny Goodman, Duke Ellington, Casa Loma, Louis Armstrong and the Dorsey Brothers all benefitted from her arranging skills. Aside from the mid-'40's, when she played regularly at New York's Cafe Society and recorded for Moe Asch, the direction of her professional and personal life was more down than up, until the late 1960's. Kernodle makes it clear that Mary Lou continually paid a stiff price for her fierce devotion to innovation and independence.

Finally, through her own determination and management by Fr. Peter O'Brien, Williams began to achieve the recognition she so richly deserved. The last four years of her life were spent teaching at Duke University (quite an achievement for a high school drop-out!) and performing at many of the world's best venues.

Near the end of her life Mary Lou Williams often stated that she had lived through and played all the styles of jazz. Kernodle manages to convey this long, fascinating experience without any significant omissions. I only wish that she had detailed some of the posthumous recognition of her subject's work. Every year the Kennedy Center hosts the Mary Lou Williams Women in Jazz festival. Numerous reissues of her recordings continue to appear. Mary Lou has been depicted by pianist Geri Allen in the film Kansas City and has been discussed in the documentaries A Great Day in Harlem and Ken Burns' series Jazz. She has been inducted into Downbeat's Hall of Fame. Trumpeter Dave Douglas paid her homage in his award-winning album Soul on Soul. Mary Lou Williams' legacy lives on and on.