Like most sax players, I started on clarinet as a kid and have become increasingly involved in clarinet over the past several years, even creating a 3-clarinet (plus guitar & bass) band called Jazz Clarinets Galore. I also lead two other combos in which I play both sax & clarinet: Sounds Good and Swing 'N' Samba. My jazz playing is mostly mainstream but since attending the Salsa Meets Jazz/Afro-Caribbean Jazz Seminar led by Eddie Palmieri & his octet members in 2001, I've been increasingly interested in Latin music, and have composed rumbas, boleros and tangos.

Since Fall, 2003 I've been on the board of the advocacy organization Baltimore Jazz Alliance

Golson and Trane Dissed in Philly (circa 1944)

This article was originally published at All About Jazz in 1999. John Coltrane and Benny Golson stand among the major figures of jazz in the second half of the twentieth century, Coltrane primarily as a player and Golson primarily as a composer. But in 1944 jny: Philadelphia they were teenagers just getting their feet ...

Someone To Watch Over Me: The Life and Music of Ben Webster

Mary Lou Williams: The Lady Who Swings the Band

Imagine a pianist playing concerts with Benny Goodman and Cecil Taylor in successive years (1977-78). That pianist was Mary Lou Williams. In a career which spanned over fifty years Mary was always on the cutting edge. She was born Mary Scruggs in 1910 Atlanta. Her mother was a single parent who worked as a ... 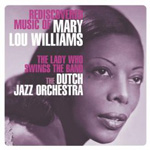 Thankfully, Mary Lou Williams' music has been getting “rediscovered" quite a bit over the past few years through reinvestigation of her sacred works, as well as her own solo and small group performances, plus interpretation/tributes by small groups led by Dave Douglas, John Hicks and Geri Allen. Now the Dutch Jazz Orchestra has given us Williams' ...

The Devil's Horn: The Story of the Saxophone

Michael Segell The Devil's Horn: The Story of the Saxophone, From Noisy Novelty to King of Cool Farrar, Straus and Giroux 336 pages ISBN: 0374159386 2005 I recently saw Steven Spielberg's new movie, Munich. When the Israeli hero moves to Brooklyn, the sound of a saxophone ...

All That the Dog Ever Wanted

Amy Neftzger All That the Dog Ever Wanted Fields of Gold Publishing ISBN: 0974629618 2005 32 pages In this children's picture book, Django the golden retriever tries to emulate his master, Cole, an aspiring jazz musician. Cole, who we never actually see, has just received a ...

Generations: Steve Wilson, Billy Childs, Ray Drummond and Ben Riley Kennedy Center Jazz Club Washington, DC October 22, 2005Those of you who know Steve Wilson will probably wonder what cave I've been living in, but this club date was my introduction to the saxophonist, as well as Kennedy Center's ...