BY MATT MARSHALL
January 16, 2010
Sign in to view read count 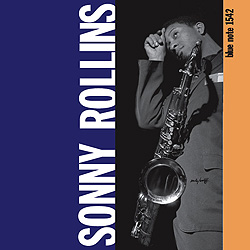 Often lost and forgotten in the mix of spectacular albums saxophonist Sonny Rollins made for the Prestige label in 1956 (including "all-time" sets Saxophone Colossus and Tenor Madness) and his second Blue Note effort, Sonny Rollins Vol. 2 (1957), considered by some to be Rollins' greatest album of all, Sonny Rollins Vol. 1 is nevertheless an indelible piece of work. It would stand out in almost any other musician's canon (or even in a different era of Rollins' career).

Still much in tune at the time with bop drummer extraordinaire Max Roach, who is given a lot of space to clamor here, Rollins composed several hard bop gems for this set. The best is the infectious and unjustly buried "Decision," which by all rights (and tones) should be a well-worn standard in 2010. The plus to this musical miscarriage of justice is that the tune as Rollins recorded it is still incredibly fresh after all this time. Its jumping theme is the first swinging projection to shoot from the speaker once needle is set to vinyl, and it's hard to recall a more engaging opening to an album. (In fact, if there's a defect in this case to the Music Matters format—two, 180-gram, 45-rpm records that hold but one or two tracks per side—it's that it might take the listener awhile to get beyond repeated listenings of the first side.)

Rollins' tone on "Decision" is biting and richly textured, while trumpeter Donald Byrd's take is smooth and flowing. On the following track, "Bluesnote," their roles, while perhaps not intentionally so, are reversed, with Byrd favoring a sharp-edged attack and Rollins following to smooth things out, if with—as always—a plethora of shifting, overlaying ideas. This sonic dualism (true, some have labeled the pairing as simply less-than-complementary) continues throughout the record, though Byrd's statements wear a bit thin and repetitive by the time the final two tracks spin around.

The inclusion of "How Are Things in Glocca Morra?" has been cited as a curious, if adventurous, choice for a bopper. But Rollins demonstrates his deftness at crooning a ballad, a la Johnny Hartman or Al Hibbler, then switching to break apart the melody harmonically, revealing a multidimensional, cubist vision. The closer, "Sonnysphere," is a bebop burner that sends the record out on a jabbing, weaving Rollins theme.

As mentioned, Roach is a guiding force throughout, contributing most notably on the opening two numbers, where his lyrical yet propulsive solos demonstrate just how musical drumming can be. His trades with Rollins at the close of "Plain Jane" and "Sonnysphere," while somewhat programmed in their placement, do offer invigorating, nuanced dialogues between the two giants. Pianist Wynton Kelly supplies typically heavy, patient, chopping support and solos, yet taps brighter, more tender fare on "Glocca Morra." Bassist Gene Ramey plucks steadily, but is afforded only one brief solo passage on "Bluesnote."

Vol. 1 would make a worthy addition to any jazz collection on the strength of "Decision" and "Glocca Morra" alone. Throw in the three additional Rollins compositions, the saxophonist's inspired interpretations throughout and the full, warm sound of this mono vinyl reissue and you got a piece that could well be a collection standout.