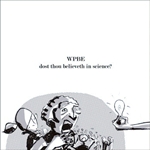 The Worst Pop Band Ever's title displays a sense of humor and frivolity, but in name only. The Toronto based group consists of a talent pool whose members have performed on the fringes (groups like The Shuffle Demons) or with traditionalists (Wynton Marsalis). And since WPBE's formation in 2005 they've taken it to the streets with music that "amicably reconciles a love of both 'Indie Pop' and improvised music." Though their mantra humorously states to "Imagine the ugly love child of Miles Davis and Radiohead," there's nothing abnormal or unappealing in their sophomore release Dost Thou Believeth in Science?.

"House For His Heart" sets the recording's persona with a mid-tempo groove, that's never overplayed or complicated as things begin to cook and simmer nicely. The operative word here is smooth, mellifluous saxophone against as steady throbbing drum and bass, colored by exquisitely placed turntable scratches. This cool vibe continues on "If Only My Name Was Steben And I Believed In Science" with undulating keyboard and soothing improvisational touches and solos.

The oddity in this consistent program is "Man Down" with its combination of blues shuffle and swing. But things get back on track with the atmospheric "Bonita," one of the highlights, with the sound of sampled voices, an expressive sax solo, and dreamy ostinato keyboarding. Things heat up a bit on "Minor Bruise" where Tim Shia's traps drive a sweltering mid-tempo melody.

The remaining tracks are equally satisfying and also feature two sublime vocal selections. The first, a magnetic remake of one of the all time great pop songs— Burt Bacharach's and Hal David's "(They Long To Be) Close to You" where Elizabeth Shepherd's sultry voice intertwines with the band's otherworldly touches. It is magical. The second showcases Rhonda Stakich in "Yesterday's News," another delicately balanced work of fine music, vocals and mood. From start to finish Dost Thou Believeth in Science? is hip enough and deep enough for jazzers and non-jazzers alike.