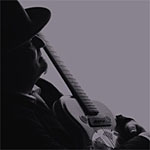 So much has been written about the Nordic sound that it's easy to forget, for most Norwegians—like anyone else—that their roots don't lay entirely within the tradition of their own country. In the case of the normally far-from-reticent Knut Reiersrud and the aptly titled Gitar, there are trace elements of traditional British folk music, the blues, Ry Cooder, acoustic tap-masters like Michael Hedges and more, but the result is a masterful album of gentle beauty, with Reiersrud's inestimable talents subsumed into a calming quietude.

"Bring a bunch of different guitars to the studio, sit down with a cup of Italian grind and play soft and relaxed," instructed producer/Jazzland label head/keyboardist Bugge Wesseltoft, who also plays on five of these largely original eleven tracks. Wesseltoft, one of Nu Jazz's founding fathers, has always proven to be capable of virtually anything, and here he helps create a soft, near-ambient vibe on the opening "Mohan Vina," where Reiersrud's overdubbed mix of Indian lap steel and bowed baritone guitar is bolstered by Wesseltoft's soft cushion of Fender Rhodes, setting a soft pace for what's to come. Rhodes figures prominently also on "The Hook," a ten-minute improv that, with drummer Andreas Bye's spare back beat, suggests how John Lee Hooker might sound, were he alive today and playing chill-out music.

It's an eclectic set of material, joined together by the tranquil vibe that arcs over the entire album. The mellow gospel tinge of "Low Swing" recalls, in the subtlest of ways, 1970s groove groups like Stuff, with Reiersrud's layering bluesy bends and singable melodies over Wesseltoft's Hammond organ and finger snaps. A combination of tapping and slapping the strings of his Japanese K'Yari guitar allows Reiersrud to emulate a hammered dulcimer, with Wesseltoft's synth expanding the soundscape, while on "Magnolia," trumpeter Nils Petter Molvaer sits in on what's essentially an in-the-moment improv over a series of four chords played by Reiersrud on a resonant, drop-tuned 12-string acoustic guitar. The same instrument is used on Skip James' "Hard Times Killing Floor," but Reiersrud's laidback vocal—the only one on the disc—and unusual chord voicings bring an altogether different vibe to this blues standard.

As much as the added collaborations on eight of the tracks give Gitar greater depth, Reiersrud is just as compelling on his own. A gentle tremolo, applied to his D-tuned Fender Esquire creates a satiny cushion for Reiersrud's overdubbed resonator guitar, while on "Gorrlausen," the album's most fervent track, Reiersrud references the Norwegian traditional fiddle tuning for an unaccompanied miniature as impressive for its restraint as for its confident virtuosity.

Gitar may be understated, but it's a masterwork nevertheless; an album that, after just missing the boat for 2009 "best of" lists, remains an early contender for the new year.