A distinctive baritone singer who came into prominence with the Duke Ellington Orchestra in the 1940s, and scored a hit later with his version of the song "Unchained Melody."

Albert Hibbler was born in August of 1915 in the little town of Tyro, Mississippi. In 1927 his family moved to Little Rock, Arkansas, and Hibbler who had been born blind studied music at the Conservatory for the Blind in that city and sang with his church choir.

He first vocalized with local territory bands in Arkansas and Oklahoma such as Dub Jenkins. In 1942 he won a talent contest in Memphis, and was asked to join the band of Kansas City pianist Jay McShann which included future jazz legend Charlie Parker. His first record was with McShann with the tune "Get Me On Your Mind" for Decca Records.

Developing his style paid off as one year later he was invited to replace Herb Jeffries as vocalist with the orchestra of Duke Ellington. He was with the Ellington band for eight years and recorded vocals with them.His most famous vocal with Ellington was "Don't Get Around Much Anymore" on Columbia. In 1947 he won the Esquire New Star Award, and Best band Vocalist for Downbeat in 1949. Hibbler was a featured vocalist with the Ellington band for their Carnegie Hall concerts in 1944, 1946, and 1947, which survive today on live recordings. Hibbler made a number of recordings for the Sunrise and Miracle labels in the late 1940’s.

He scored a major hit in 1955 with his version of Alex North’s “Unchained Melody”, and followed it the next year with another hit, “After the Lights Go Down Low”.

He made his living singing a mixture of raw blues, sentimental songs and jazz standards, all delivered in his inimitable style. He became involved with the Civil Rights movement, and was twice arrested on protest marches, in 1959 and 1963. His career suffered as a consequence, although he did record an album for Frank Sinatra’s Reprise Records.

He performed at Louis Armstrong’s funeral in 1971, and added another unexpected collaboration when he worked with the blind multi-instrumental Rahsaan Roland Kirk on the album “A Meeting of the Times,” in 1972. He recorded and performed occasionally in the 1980s, but his public appearances became less and less frequent. 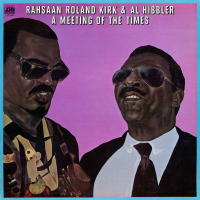 A Meeting Of The Times

All About Jazz musician pages are maintained by musicians, publicists and trusted members like you. Interested? Tell us why you would like to improve the Al Hibbler musician page.